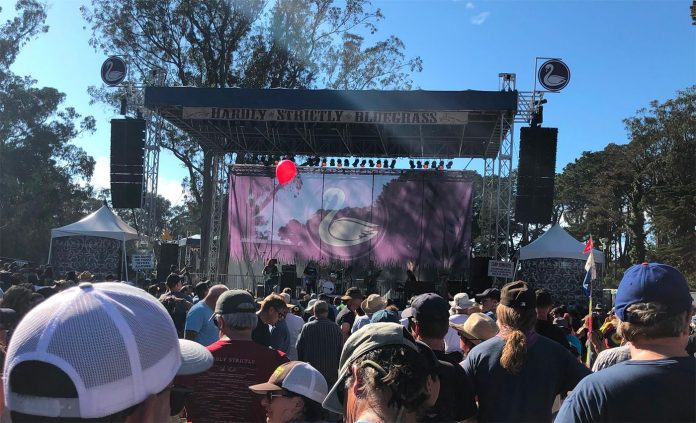 For the first time in three years, Hardly Strictly Bluegrass will return to the western meadows of Golden Gate Park the weekend of September 30, and we now have the full lineup of artists and “Out of the Park” night shows. And this year’s lineup includes the likes of Marcus Mumford, Jay Som, and the return of the great Emmylou Harris.

It has been far too long since the beloved free music festival Hardly Strictly Bluegrass has been able to happen in San Francisco. 2020 was obviously out, and festival organizers instead “took the show on the road,” doing a (cautious) road trip to artists’ hometowns to film them performing for a streamed show.

The HSB crew at Great American Music Hall for a shoot in 2020. Photo courtesy of the HSB archive

The Delta variant derailed plans for a 2021 festival — even though Outside Lands managed to come off without a hitch just four weeks after Hardly Strictly would have traditionally occurred. With a lot of plane tickets booked and arrangements already made, HSB organizers instead brought artists to an undisclosed location on the Bay waterfront (looked like India Basin?) to shoot a live-streamed show. Footage from that lineup, which included HSB regulars Emmylou Harris, Ani DiFranco, and Bela Fleck as well as Mavis Staples, Bob Mould, and others, is still available on HSB TV, available on Apple TV or Android devices. (See singer Andy Schauf’s full 2021 set below.)

But it’s back to the real deal, at last, six weeks from now in Golden Gate Park. Between Friday, September 30, 2022, and Sunday, October 2, dozens of artists will play again on six stages to crowds of local music fans. And because it’s free, this fest tends to draw more people than even Outside Lands — estimated to be around a half million attendees each day, in a normal year.

As most of you likely know, this annual festival was underwritten by the late billionaire, philanthropist, and bluegrass aficionado Warren Hellman (he called it his “most selfish gift” to the city). First launched in 2001 as Strictly Bluegrass with just two stages, the fest quickly grew, adding a third stage in 2002, and then becoming Hardly Strictly Bluegrass in 2003 with addition of more diverse acts and a fourth stage.

While it’s widely rumored that the festival was “endowed in perpetuity” by Hellman before his 2011 death, that isn’t quite true. As his son, Mick Hellman told SFist in 2016, the festival is “secured for a long time” by Hellman’s money, but not technically endowed forever.

Also because it’s a free festival, organizers have tended not to reveal the complete lineup until just before the festival happens — so there may still be some big names to come as they tease out the lineup in medleys. Three medleys and lineup additions have come out so far, the first group of 10 having dropped in late July.

Returning acts including Bela Fleck, Emmylou Harris, and San Francisco bluegrass band the Brothers Comatose — and we wouldn’t be surprised to Ani DiFranco and Moonalice added to the bill in the coming weeks, as they are perennial HSB performers. New to the lineup as of this week are Bay Area native Jay Som, Macarthur grant winner Rhiannon Giddens, and Bonny Light Horseman, the folk trio consisting of Hadestown creator Anais Mitchell, The Shins singer Eric D. Johnson, and founding member of The National Josh Kaufman. (They have a pretty new song called “California.”)

Here’s the lineup we know so far:

Also, a series of night shows at Bay Area venues has been announced:

10/4 – The Chapel – Moonalice and “Summer of Soul” screening

Expect another medley or two with accompanying lineup additions in the coming weeks, as the full and complete lineup remains a closely held secret.