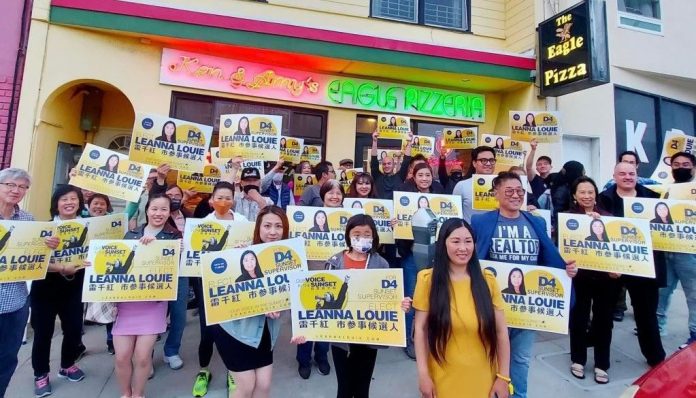 All three moves by D4 supervisor candidate Leanna Louie coincided with primary and special elections, plus a (seemingly missed) deadline for registering to run in November, and now the Department of Elections has opened a review about her residency in the district.

Longtime SFist readers may recall our 2007-era series “Oh No, Ed Jew!,” which covered how the then-District 4 supervisor very much lived in Burlingame despite claiming to live in the Sunset. (There were other matters covered in that series too.) We similarly ran a series called Daly Move Watch 2K9 two years later, when then-Supervisor Chris Daly bought homes in Fairfield, though a legal review found he still lived in San Francisco.

She blames the Elections Dept.https://t.co/2OnSCN7ZEH

But the residence controversies are raging again, as Mission Local reports on how District 4 candidate Leanna Louie curiously changed her residence three times in just three months, and in the most recent move, may have missed the 30-day residence requirement before declaring her candidacy in District 4. There is enough “there” there that the Department of Elections confirmed to Mission Local that they are opening a review into the matter, which could result in removing her name from the District 4 election ballot.

Let’s detail these moves in bullet points below.

Significantly, that last May 7 address change came only 27 days before her June 3 declaration that she was running for the District 4 seat. As Mission Local points out, the Department of Elections requires that “A candidate for the Board of Supervisors must reside and be registered to vote in their district for at least 30 days immediately preceding the date he or she files the Declaration of Candidacy.”

Louie tells Mission Local that this was all a Department of Elections snafu. “It’s an election error,” she told the site. “I never changed it [my registration]. They kept sending ballots to my [Bayview] address.”

Mission Local is totally inaccurate in reporting. Fake news. I registered my 94116 address on 3/8/2022. The Dept of Elections sent ballots to my old registration address in 94124 in April 2022. I did my civic duty by voting.

Yet if that’s the case, is the above tweet an admission that she knowingly voted from the wrong address? That’s probably a matter for the Department of Elections to determine.

Current District 4 Supervisor Gordon Mar was quick to pounce on an opponent’s possible misstep. “The facts, as alleged, are seriously troubling,” Mar told Mission Local. “If true, they are potentially disqualifying as well as being deeply offensive to District 4 voters.”

Other candidate Joel Engardio was more neutral. “The City Attorney and Department of Elections should set a standard of what it means to reside in a district,” he told Mission Local. “Let’s make the relevant agencies make the determination.”

Yes there have been a ton of elections this year, so things like voter confusion, or perhaps even a Department of Elections miscue, are more likely. But three changes in a year seems a stretch, and it does raise eyebrows that the moves correlate with a February special election, an April primary election, and the deadline for the November election in a race that has already taken some strange turns.

Facebook
Twitter
Pinterest
WhatsApp
Previous articleChesa Boudin and His Supporters Seize On Revelation About Brooke Jenkins’s Recall Payday: ‘Integrity Is Central to the Job of DA’
Next articleFormer Twitter Employee Convicted of Sharing Personal Data of Dissidents With Saudi Government