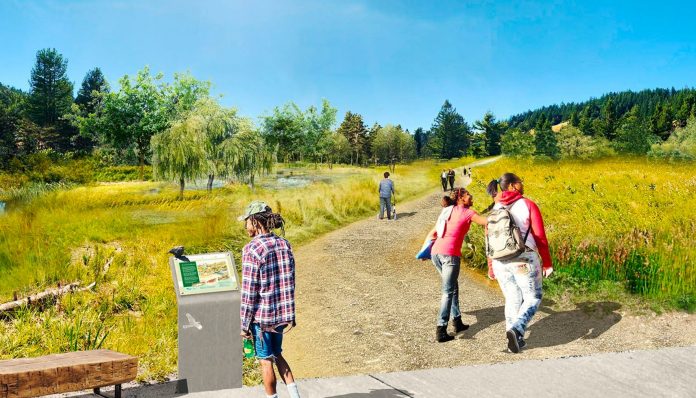 In a positive story of ecosystem restoration and climate resilience in Marin County, a former golf course was purchased by the nonprofit Trust for Public Land and is in the process of being devolved into its former state as a floodplain and wildlife habitat.

The 18-hole, 157-acre San Geronimo Golf Course, which was built in the 1960s, went out of business and was put on the market in 2017. It was purchased for $8.85 million by the Trust for Public Land (TPL), and it’s since been renamed San Geronimo Commons. TPL has plans to restore the portion of the Lagunitas Creek watershed that runs through the property — known as “the Bay Area’s last great salmon run” — including San Geronimo Creek.

The golf course was part of a planned but never constructed suburban development, and like many golf courses around the country became financially unviable in recent years. As Bloomberg reports, with the property’s connections to multiple open-space preserves and the nearby Point Reyes National Seashore, TPL saw it as a prime opportunity for returning land to its wild state and returning it to the community. TPL has been undertaking a public-input process that began in 2019 that is helping guide the project. They expect to add hiking and biking trails, as well as removing culverts, underground water pipes, and other infrastructure that was disrupting the natural flow of the waterways through the area.

“It’s a once-in-a-lifetime opportunity to recreate the historic floodplain and reconnect the creeks in a way that creates a far more climate-resilient ecosystem in this area,” said Christy Fischer, TPL’s Northern California coastal conservation director, in a statement to Bloomberg.

The former greens and fairways on the property are already going through a process of “rewilding” and returning to their more natural, overgrown state. Invasive grasses have been replaced with native species, and more of the land will get shifted to allow the creeks to flow more easily into the floodplain as they once did.

TPL also acquired the gold course’s rights to 6.5 million gallons of water annually, which is being rededicated to restoring the salmon runs, instead of irrigation.

Also, the golf course’s former clubhouse and its surrounding 22 acres are being adapted for community use.

All-in-all, it’s a feel-good story about undoing past damage to the local environment, and eventually you’ll be able to hike the property and only find the vaguest clues about its previous use — like hole markers saying “Par 5,” and the like.

Rendering via the Trust for Public Land