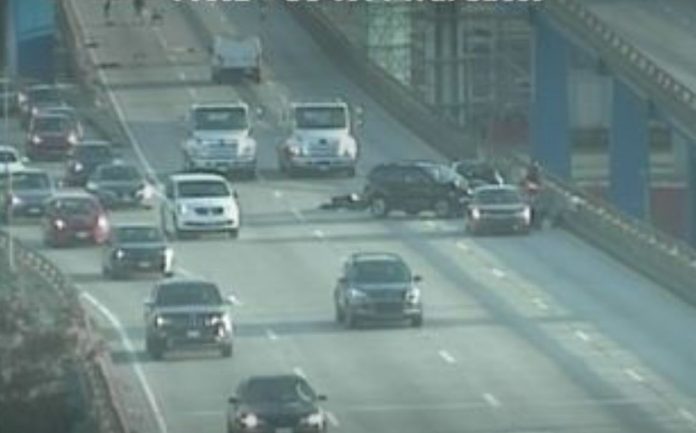 A fatal crash involving a motorcyclist ended up impacting traffic in multiple directions early Tuesday because of where it took place, and well into rush hour traffic was still snarled and slow all the way across the Bay Bridge.

The crash happened around 3:30 a.m., and CHP is still investigating and they are unsure whether it was a solo crash by the motorcyclist, or if another vehicle might have been involved. As KTVU explains, the motorcyclist crashed and “was ejected from the 101-southbound-to-eastbound-I-80 connector and fell onto the I-80 westbound-to-southbound-101 transition below the 101-to-80 connector” in San Francisco.

After being ejected, the motorcyclist, described as a man in his 30s, reportedly fell 30 feet onto the roof of another vehicle on the roadway below. That vehicle stopped and was then rear-ended by another vehicle. Drivers in both cars suffered minor injuries.

The motorcyclist was pronounced dead at the scene.

The Chronicle reports that the CHP believes the motorcyclist crashed into a wall while “traveling on the connector ramp from southbound Highway 101 to eastbound I-80.” The car he apparently fell onto was traveling from I-80 west to Highway 101 south.

The investigation continues into a deadly crash in #SanFrancisco. The ramps from southbound 101 to eastbound 80 and from westbound 80 on to southbound 101 remain closed. The big backup is 80 which is slow across the #BayBridge from #Oakland. #KCBSTraffic Photos: Caltrans pic.twitter.com/muuhu68ujg

The alerts that went out about the crash made it sound like every freeway into and out of San Francisco was shut down, which was almost true for several hours. “A vehicle collision is affecting Highways US-101 Southbound to US-80 Eastbound and US-80 Westbound,” said the ALERT SF notice Tuesday. “Lanes are blocked.”

While lanes had reopened as of 9 a.m., there continued to be residual delays on the 101 southbound ramp to I-80 east in SF, and there may still be slowness coming westbound across the Bay Bridge.