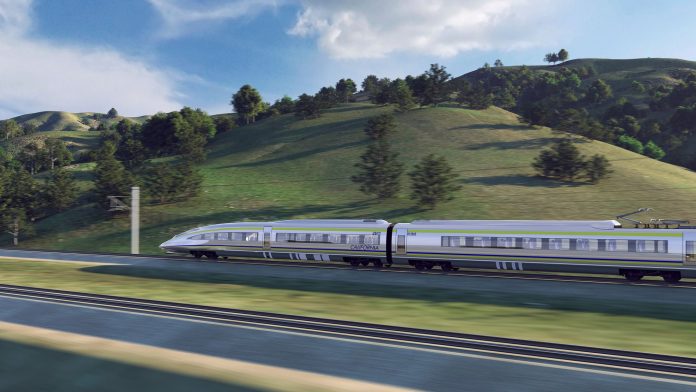 First Bit of California High-Speed Rail in NorCal Approved, Still Not Coming Until 2031

One 90-mile segment of the elusive California high-speed rail project has won approval to connect San Jose and Merced, but a look at the projected competition dates will certainly dampen any excitement you may feel over this.

The California high-speed rail project has been in the works for so long that it makes the Van Ness bus lane construction seem like a quick power nap. It’s one of those entities, like PG&E, that reporters just instinctively type the word “beleaguered” in front every time we refer to it.

But the California High-Speed Rail Authority, which was created in 1996, has announced the approval of the first northern California stretch of this thing. The Chronicle reports that 90-mile San Jose-to-Merced stretch of rail has been approved. But in the true “As if we’ll live this long” spirit of the California high-speed rail project, it is not expected to open for service until 2031.

🚨 The Authority Board of Directors just certified the Final EIR/EIS for the San José to Merced project section!

“Today’s approval represents another major milestone and brings us one step closer to delivering high-speed rail between the Silicon Valley and the Central Valley,” Authority CEO Brian Kelly said in a statement. “The Authority is poised to make the vision of high-speed rail in the Bay Area a reality. We look forward to continued collaboration with our federal, state and local partners to advance the project in Northern California.”

As you see from the image above, some parts of this track will be above-ground aerial track, some at ground level, and some in tunnels beneath the ground. This newly approved stretch will connect San Jose’s Diridon Station to Gilroy, and from there to the Central Valley track (Merced, Fresno, Kings-Tulare and Bakersfield). That Merced-to-Bakersfield  Central Valley track is expected to be completed in 2029.

San Francisco will eventually be connected to all of this, which should be — should be  — less painful, because they’re planning to use existing Caltrain track. By that time, we expect to have a rail connection between the 4th and King Caltrain Station and the Salesforce Transit Center, so the transit center would effectively be the northern end of the final, completed high-speed rail project. But you can say with certainty that there will be many more of the lengthy delays, steep cost increases, and politically motivated hold-ups that have made the California high-speed rail project a notoriously low-speed pursuit.