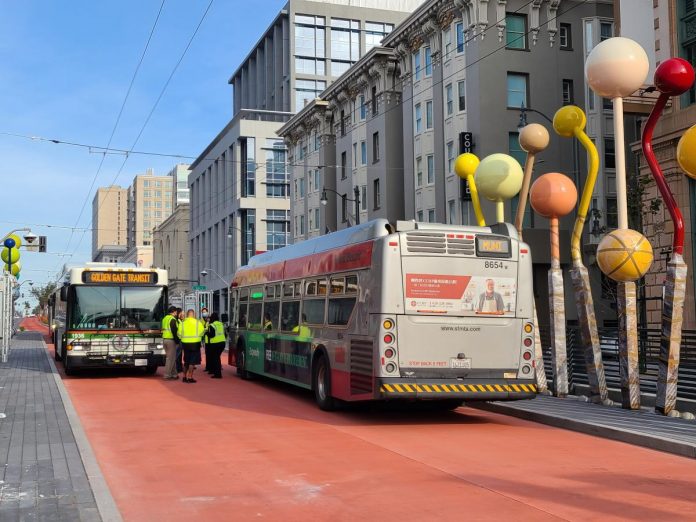 One Month In, SFMTA Says Van Ness BRT Slashing Trip Times By Up To 35%

Was it worth many years of construction and hassle? The SFMTA has the early numbers on the new Van Ness bus lanes, and says they’re cutting down trip times and leading to a boom in 49-Van Ness ridership.

We are now basically one month into the Van Ness Rapid Transit Project-is-finally-finished era, or at least, we will hit that milestone Sunday after the long-awaited red bus lanes’ April 1 opening. And since the San Francisco Municipal Transit Agency (SFMTA) put us through years of construction, horrible traffic snarls, and the destruction of many small businesses over this, we would expect some pretty decent payback in terms of shorter trip times and reduced volumes of traffic.

And that appears to be the case! Well, if you take SFMTA’s word for it, at least. The Chronicle reports on Muni data covering the first month of the Van Ness BRT, and says that trip times are reduced, and 49-Van Ness ridership is higher. This all comes from a lengthy SFMTA document that will be presented to their board next week, and we’ve included the most relevant Power Point slides below.

The Chronicle notes that “Northbound weekday trips on the BRT lanes are also saving riders 35% in travel times,” and that “it takes Muni buses about nine minutes fewer to travel on the corridor than it did before the BRT project.” (Southbound trips are 22% quicker).  But that’s kind of cherry-picking the most optimal data.

The chart above shows total round trip times, which may be a more accurate assessment. It compares the pre-BRT era of April 2016 (in blue) and the early day of the BRT red bus lanes (in red). Morning rush hour trips are 29% quicker, daytime trips 24% quicker,  and evening rush hour rides 23% quicker.

SFMTA also claims a ridership increase of 13%, but that only measures the first week, and we are only talking about the 49-Van Ness here. The 47 is still not running, and Golden Gate Transit data is not included.

Have you seen these light-up thingies lit up yet, by the way? If not, here’s an image of what they look like at dusk.

This new data comes from a very small sample, and the data does not even cover all of April. And it only assesses one bus line! But having ridden the thing once or twice, this does pretty much check with reality. The Van Ness BRT does save some travel time now that it is finished. If only they could have shaved off a little constriction time when building it.

Related: Van Ness BRT Will Indeed Be Running April 1, After Years as a Running Joke [SFist]