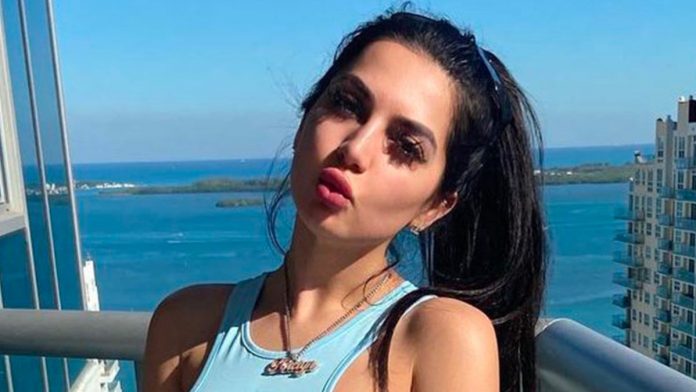 The 25-year-old woman whose friends and family probably should have sat her down years ago and confronted her about her penchant for poor choices is once again in legal trouble, this time in Miami.

Remember Arna Kimiai, the obnoxious young visitor to San Francisco who picked the wrong town in which to be flippant, drunk, and confrontational about mask-wearing in an Uber before anyone was vaccinated, coughing on the driver and snatching his phone from him? She’s in trouble again! Go figure.

In the year or so since Kimiai was caught on camera being a garbage person with two of her friends, she has gone on Instagram Live in her underwear to poorly attempt to defend her actions, pleaded not guilty to assault, gotten a lifetime ban from Uber and Lyft (which she’s probably figured out a work-around for?), gotten arrested in Los Angeles for disorderly conduct (also caught on video), and now she’s in the clink again in Miami.

Bb girl really said “I’m an entire dumpster fire of trash but while I’m here, lemme get some followers” pic.twitter.com/1WLjRNR04r

As ABC 7 reports, Kimiai is suspected of using someone else’s identification to rent a penthouse apartment in Miami and take care of some other business — the identity of a former neighbor from when she was living in L.A. last year. She’s facing potential charges of grand theft, organized scheme to defraud, and fraudulent use of personal information, per the Chronicle, which spoke to the Miami Police Department.

Kimiai’s attorney, Seth Morris, told ABC 7 that Kimiai had turned herself in to Miami police on Wednesday night and she was in the process of posting bail.

The woman whose identity Kimiai allegedly stole is an oncology nurse in San Francisco named Emily. Emily, who declined to give her last name, filed police reports here in the case, which were obtained by ABC 7, and she says she was alerted to the fraud after seeing some strange alerts from Chase. This led her to find out that her credit had been run without her permission by multiple luxury buildings and car dealerships in Miami — because of course this whirlwind of chaos has some music-video dreams of living the high life in Miami, but she couldn’t accomplish that with her own rap sheet, tarnished identity and undoubtedly poor credit!

“To find out that that’s the person that was targeting me was just crazy to me,” Emily tells ABC 7. She explained that a cellphone number used on one of the applications in Miami led her to Kimiai’s name, and a Google search brought up the Uber coughing story and more — and the pictures helped Emily connect the dots. This was a woman she’d seen a couple of times in the hallway of a building she lived in last September in Los Angeles, and that’s where she probably stole some mail and likely began this scheme.

The luxury building where Kimiai apparently succeeded in a renting a penthouse gave a statement to ABC 7 saying, “We are aware of an incident … where a resident allegedly used a fake identification to rent an apartment … we are fully cooperating with the police in their investigation.”

Says Emily, speaking to ABC 7, “I think it’s really just horrible that someone can take a really easy way out, a get rich quick scheme and try to live in the lap of luxury on someone else’s dime.”

Yes, it is! And I think it’s not a stretch to say that this woman is a horrible person who perhaps needs some serious jail time and rehabilitation! Or may she will just always be garbage.

The Uber coughing/assault case still hasn’t gone to trial, by the way. That is scheduled for June.

Also, Kimiai’s friend who allegedly pepper-sprayed the Uber driver that day in March 2021, Malaysia King, was arrested in Las Vegas just days after the incident for bank fraud. She is apparently still facing assault charges from the Uber case.

Arna Kimiai who coughed on him, now accused of stealing an SF nurse's identity. Miami PD have a warrant out for her arrest. @MelanieWoodrow’s piece: https://t.co/TBwkEpfvJ9 pic.twitter.com/RPUYCzdStH