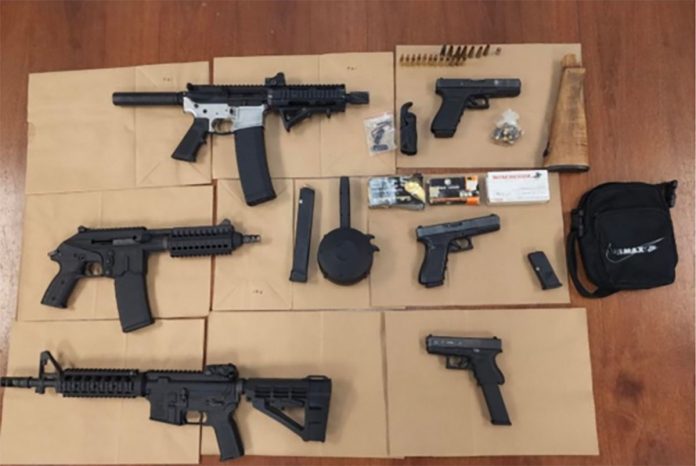 The SFPD arrested three teenagers and one 20-year-old, all of whom were allegedly in possession of weapons, and seized seven guns, including one ghost-gun rifle in a raid last week.

It’s not clear whether these arrests, or the search warrant that led to them, are connected to a trio of potentially linked homicides in and around the Sunnydale projects in recent weeks. But the SFPD served a search warrant last Thursday, August 4, at a home on Reuel Court in the Hunters Point neighborhood, and as the department explains in a release, one of the suspects inside tried to flee when police arrived.

Members of the SFPD’s Community Violence Reduction Team served the warrant around 2:30 p.m. on August 4, and they say that the subject of the warrant was the one who attempted to flee the scene.

“Officers were able to stop the suspect from fleeing, detained him, and found that the suspect was armed with a pistol,” the SFPD writes. “Officers detained three other suspects, all of whom were found to be in possession of firearms.”

A total of seven weapons, including a “Privately Made Firearm .223 caliber rifle” and a cache of ammunition, were seized by police.

Two of the suspects have not been named because they are juveniles, both 16 years old. The other two are 19-year-old Jacob Webster of San Francisco, and 20-year-old Isaiah Bates-Clark of San Francisco.

The firearm-possession-in-public charges seem to suggest an earlier crime was committed.

The arrests on August 4 came just one day after a fatal shooting on a Muni bus in the Sunnydale area that took the life of one person who has not yet been publicly named. Two days earlier, a 17-year-old boy was gunned down just two blocks away, on Brookdale Avenue in the Sunnydale projects. A week earlier, a person was fatally shot in nearby McLaren Park. Police were reportedly investigating whether these shootings were in any way linked.

While the four arrests have been made, this remains an active case, and anyone with information about the suspects is asked to call the SFPD tip line at 415-575-4444.