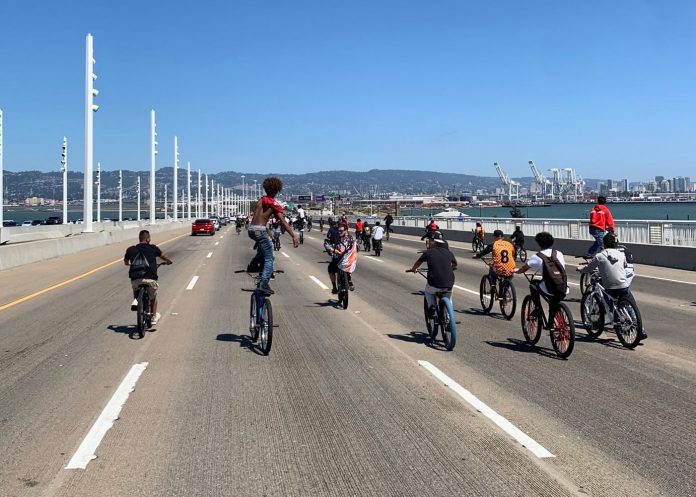 A group of what appeared to be teenagers on bicycles, numbering around 200, took over the lower deck of the Bay Bridge on Saturday afternoon and biked their way into Oakland. A short while later, some East Oakland businesses reported that they were burglarized by a gang of about 200 bicyclists.

This sounds like a case for the old Deplorable Teens tag, and as the Chronicle reports via the CHP, officers began getting reports of this rogue, Critical Mass-esque troupe of bicyclists on the bridge at 2:26 p.m. The group reportedly tied up the lower-deck lanes of the Bay Bridge for about 26 minutes.

Rather than sticking together in a tight mass, a la Critical Mass, these cyclists were weaving in and out of traffic on the bridge, and doing performative tricks on their bikes, too, as some cellphone video obtained by NBC Bay Area shows.

CHP officers got involved, pushing some bicyclists onto the bike path that only runs the length of the eastern span of the bridge. Officers also guided a group from an I-880 offramp onto West Grand Avenue, but it sounds like no one was detained and the officers lost track of the group as it somewhat dispersed.

Not long after, around 3 p.m., Oakland police received reports of “a group of roughly 200 bicyclists burglarizing businesses and throwing items at people,” per the Chronicle. Police can’t yet say that these two incidents are connected, but how many roving bands of 200 bicyclists were in Oakland at that hour?

No specific businesses or addresses were mentioned in that report.

Oakland Police Department spokesperson Candace Keas explained to the Chronicle officers arrived in the area of Bancroft and 89th avenues and the bicycle group “peeled away.” They were later reported getting back on to I-880 and riding in car traffic.

The kids on their bikes were apparently around parts of East Oakland for several hours, with CHP saying that the group ultimately dispersed near 35th Avenue at San Leandro Street around 6 p.m.

No specific group has claimed responsibility for the flash-mob brigade, but both the Critical Mass Twitter account and the account of SafeStreetRebel — which bills itself as a “hub for organizing direct actions to end car dominance” — cheered them on.

“just FYI — we didn’t organize this ride out, but absolutely condone it with two thumbs up and can’t wait for the next one!” tweeted SafeStreetRebel.

Exclusive statement from the ride, you heard it here first pic.twitter.com/yI9emOXPqe