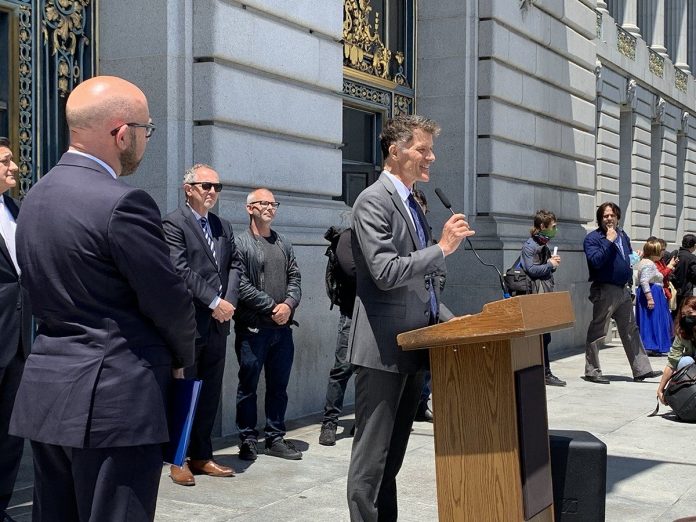 As the city now has nearly 450 confirmed monkeypox cases, we learn that the SFDPH is only contact tracing for a fraction of those cases, with one department email saying “Don’t want to say too much, or beg more questions.”

When San Francisco Mayor London Breed declared a state of emergency over monkeypox in the city two weeks ago, it seemed like a real all-hands-on-deck move to throw every resource possible at the problem. But now, with infections still on the rise and currently standing at 444 confirmed cases in the city (as of Thursday’s numbers), we learn the response may not be as thorough as we’d thought. A disconcerting report today from the Bay Area News Group reveals internal SF Department of Public Health emails showing the city is doing only a very small amount of contact tracing among those who’ve tested positive, instead basically leaving it up to those people to contact anyone they may have infected.

Per the News Group, the DPH consciously decided to forego most contact tracing “about a month ago,” which would be a couple weeks before Breed’s state of emergency declaration.

The health department is doing some contact tracing, but only for a few certain, specific demographics. And while they were originally doing contact tracing for every case, they’ve pulled back on that effort significantly, with the rationale that people just aren’t disclosing the names of all of their partners anyway.

“This made it difficult to contact trace all known cases,” one DPH email said. “We are currently doing case investigations and contact tracing for youth under 18 years of age; any person who could become pregnant, and people who are pregnant, among others.”

(That criteria does not include LGTBQIA+ men and the Latinx populations, who are currently experiencing the highest numbers of cases.)

But there’s still a troubling pattern within the internal DPH emails. “Please weigh in – don’t want to say too much, or beg more questions,” one medical director wrote in a July 21 email coordinating the department’s response.

Another email the next day from a City Clinic medical director said, “I think this response over-emphasizes contact tracing.” She added, “We’re scaling back (case investigators) and encouraging people to self-refer partners, correct? I think the response should be more in line with our strategy… I don’t think we should say: ‘we are doing contact tracing for monkeypox.'”

The News Group did not have to look hard to find clinicians who consider it a flawed strategy to forgo contact tracing. “It’s critically important to let exposed people know who they’ve had an encounter with,” Yale School of Public Health Dr. Scott Roberts told them.

As of the most recent numbers (and this is week-old data at this point), 72% of the nearly 400 infected people had a DPH interview, and another 9% were awaiting those interviews. But again, in  those interviews they are just told to contact all their partners, DPH is not doing this proactively. And yes, the cavalry is coming in with thousands more vaccine doses arriving, and DPH says the SF General Hospital vaccine clinic is scheduled to be open again Tuesday. But just as the vaccine backlog may be showing signs of clearing, we could end up with a different problem if a spike in infections leads to large numbers of people not realizing they’re carrying the virus.