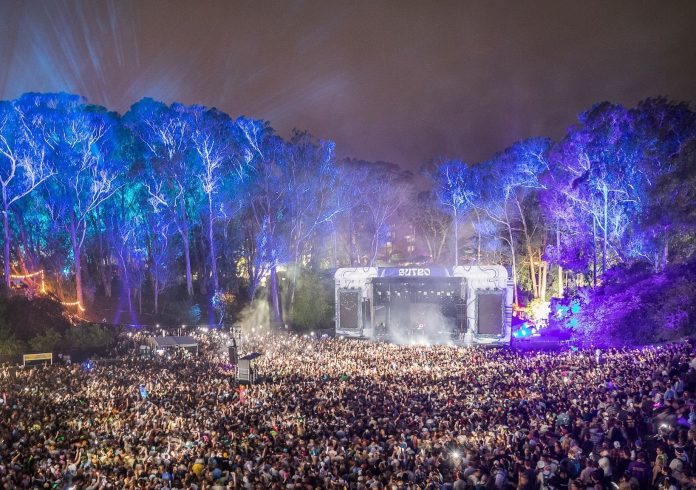 Photos: Day One of Outside Lands 2022 Sees SZA Shine… and a Young-Skewing Crowd Descend on Golden Gate Park

On the first day of Outside Lands 2022, a youngish crowd — made up of twentysomethings dressed in Coachella-appropriate regalia — convened at Golden Gate Park… where friendships were tested when choosing between the conflicting set times from SZA, Phoebe Bridgers, and Disclosure.

In a welcomed bit of atmospheric relief, Karl The Fog’s usual chilly haze gave way to warmer weather than expected Friday at Golden Gate Park. The outer layer-stipping afternoon sets yesterday included Faye Webster, the 23-year-old Atlanta songwriter whose plainspoken albums wash over like warm honey, and Melbourne-based Hiatus Kaiyote, the band preforming a number of songs from their newest album, Mood Valiant. (If some of Hiatus Kaityote’s sounds from yesterday sparked a fit of deja vu, it’s likely because you may have heard those beats sampled on songs by The Carters [Beyonce & Jay-Z], Kendrick Lamar, and others.)

Friday’s general on-site merriment — punctuated by moments of dizzying food prices and winks to 2000s-era fashion choices donned by Gen Z concertgoers — did come across as a bit premature in the rhythm of festival season. Not ten months had passed since the annual music festival, which went completely virtual in 2020, ushered in legions of “Lizzbians” to crowd Lands End to watch Lizzo command the present crowd over the past Halloween weekend.

It all felt a bit much. Exhausting. But with OSL returning to its usual, expected August calendar slot, yesterday’s festival start was a welcomed nod to pre-COVID days.

Hawk-eyed attendees were also quick to note that the arched wooden double windmills of yesteryear had been replaced with a solitary glass-and-steel tower windmill. It was the most visible change to this year’s Outside Lands festival — this  Instagram-trap double-windmill with a new, more-steampunky Instagram-trap single windmill that is highly bedazzled with LED lighting schemes.

The Chronicle has some chatter on the matter, quoting attendees who were “pretty bummed” over the loss of something they called “pretty iconic.” But Outside Lands director of creative production William Irons explained to the Chronicle that “years of weather forced us to retire” the old lumber double-windmill, which makes sense, they’ve been using the same one since like 2008.

The crowd Friday appeared laxer about COVID-19 than last year; for 2022, there was no mandatory vaccine check or overt recommendation to mask up while on festival grounds.

Maybe it’s a surrender to a new norm. Perhaps it’s a listlessness born from utter exhaustion — made more tiring by the current rise in monkeypox cases recorded across the Bay Area.

Either way, the present surge of synchronous virus outbreaks in San Francisco isn’t an excuse to thwart the “opportunity to have a good time.”

“This year you don’t have to mask up, you don’t have to provide proof of vaccine, you don’t have to do some of the things you did in the past,” Mayor Breed proclaimed at a news conference with festival producers Another Planet Entertainment on the night before the event. “I know that in a major city like San Francisco we have our challenges, but it doesn’t mean we shouldn’t take an opportunity to have a good time … Just be mindful. If you don’t feel good, do not come.”

This year’s Sapphire Lounge Presented by Chase is an ode to late-stage capitalism, and you’re not allowed to go in to enjoy the luxe seats with the premium view of the Twin Peaks stage unless you are a Chase Sapphire card holder. The folks at this “brand activation” informed SFist that you can scan a QR code and apply for a Chase Sapphire card on the spot, and hope to get approved amidst spotty cellular coverage to gain entrance.

SFist did not try this.

People packed Lands End tighter than albacore tuna in a tin can before Lil Uzi Vert took to the stage before his 7 p.m. set time. The rapper, whose name has become synonymous with eccentric hairstyles and androgynous fashion, delighted a massive crowd that gawked over his kinetic performance. Washed Out provided some early-aughts nostalgia for fans who were attuned to the chillwave genre that dominated much of the 2010s’ soundscape.

ranger dave would play the fool for @disclosure any day

Come 8:25 p.m., partnerships and friendships were put to the test as what was either a massive scheduling oversight or sly against fandoms came to fruition: The after-dark sets by Phoebe Bridgers, SZA, and Disclosure… all of which were organized to begin within 20 minutes of one another. (Bridgers began swooning from a Christmas light-wrapped mic-stand at 8:30 p.m. at Twin Peaks; SZA’s flouncy, long-sleeve top started swaying in the wind at Lands End around 8:45 p.m.; lasers danced through and refract off the park’s atmospheric haze by 8:25 p.m. Friday.)

At its axiom, the first day of Outside Lands was as familiar as it was in past years. Large lines still snaked the general admission bathrooms. Hillsides began to slick with mud as footwear pounded the ground throughout the day. Food was plated and drinks were slung for sums of money that in any other setting would’ve evoked stomach pangs.

Nonetheless, the giddy magic of dancing with friends — new and old — inside Golden Gate Park at OSL remains as luminous as ever. The task at hand now is to gauge what wattage today and tomorrow’s sorcery shines at.

If you didn’t make it to OSL’s first festival day for 2020, don’t fret. Feel free to live vicariously through some of our favorite moments captured in digital stills, below: