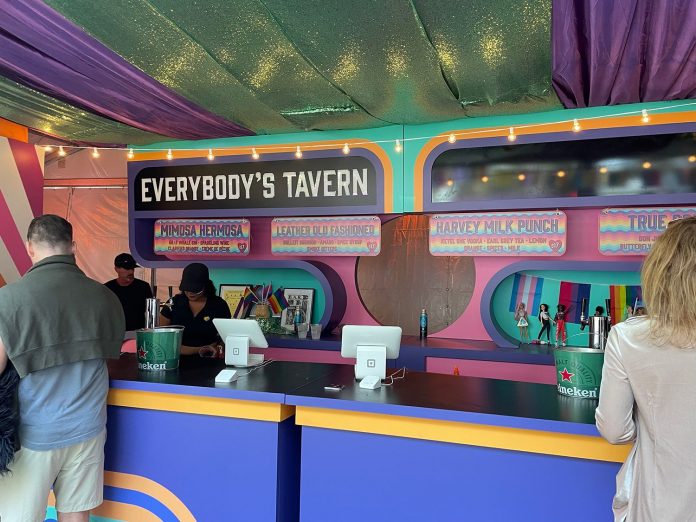 Is it weird or kind of nice that a music festival themes one of its cocktail concessions after LGBTQ civil rights and queer-bar nostalgia?

The main cocktail area at Outside Lands this year, known as Cocktail Magic, once again has its own mini stage and performance schedule. And as in previous years, it’s offering a dozen or so pre-batched cocktails on tap. But unlike in previous years when they’ve had local bars curate the cocktail menu and then set up concessions based on their businesses, this year there are three themed “bars” not connected to any actual businesses. (The cocktail selections all appear to feature one of the sponsor spirit brands at the festival, all of which also have their own branded concession areas elsewhere: Bulleit Bourbon, Gray Whale Gin, Ketel One Vodka, Bacardi rum, Don Julio tequila, and Aperol.)

One bar area, called the Buttery Tipple, seems to be decorated as a 1970s-inspired cocktail lounge, with cocktails called Strawberry Fields Julep and Banana Hammock Daiquiri.

On the other end is the Silver Girls ’95 bar — and off-brand Golden Girls-inspired setup with drinks like the St. Olaf Fizz and the Sophia Sour.

Then in the middle is Everybody’s Tavern, which is decked out with various Pride flags and historic photos of the Castro, as well as a historic map of gay and lesbian bars around the city from 1971. The drinks include a Leather Old Fashioned and a Harvey Milk Punch.

This is San Francisco, after all, and the LGBTQ civil rights movement continues to be a big part of our political and cultural history. And the kids these days, they’re all fluid or they don’t really stress about this stuff! And maybe they know this history or maybe they don’t. I guess it just seems a little bittersweet when actual LGTBQ bars are dying in cities across the country, and this feels like a museum piece being used to sell drinks at a music festival that is, by and large, not vaunting an LGBTQ lineup — Kim Petras and SZA are there, though, and I guess it’s a big deal that a queer Black woman, SZA, is a headliner?

Anyway, here’s a fun closeup look at the historic LGBTQ bar map they dug up — the Missouri Mule was one of the only Castro queer bars at that point, right where Beaux is now. And it wasn’t even called the Castro at that point — it’s referred to as Upper Market, and most of the bars are concentrated on Polk Street and in SoMa on what’s labeled “Miracle Mile.”

Facebook
Twitter
Pinterest
WhatsApp
Previous articleFriday Likely to Be the Best Weather Day at Outside Lands, But We Could See Three Sunny Afternoons
Next articlePhotos: Day One of Outside Lands 2022 Sees SZA Shine… and a Young-Skewing Crowd Descend on Golden Gate Park