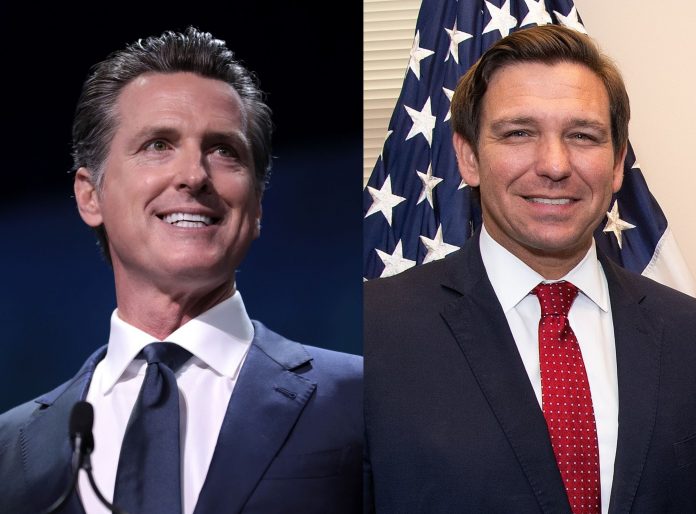 California Governor Gavin Newsom and Florida Governor Ron DeSantis are both up for reelection this coming November 8. This may have something to do with why they keep making political hay out of taunting one another from 3,000 miles away.

Newsom has been going out of his way to pick fights with the Florida governor for more than a year now, throwing shade at Florida in a New York Times interview last June, and pointing out on The View last December that there were “53% more deaths per capita in the state of Florida” than in California. In the wake of the fallout from Florida’s “Don’t Say Gay” bill and resulting spat with the Walt Disney Co., Newsom took another unprovoked swipe.

Let me get this straight.

But go ahead and keep telling us about “fiscal responsibility” & your “business-friendly climate.” https://t.co/U7ACTMGJ6y

“Desantis’ Disney/Don’t Say Gay retaliation bill could increase a million Floridians’ property tax bill by 25%,” Newsom tweeted a week ago. “But go ahead and keep telling us about ‘fiscal responsibility’ & your ‘business-friendly climate.’”

“It is a problem because I do think there’s a class of voters who would come to Florida, and they would continue to vote the same way.” pic.twitter.com/BYcIvTydKY

Earlier this week, DeSantis shot back on a panel where he was discussing California companies relocating out-of-state, and eventually turning those states’ voting bases bluer. “Those employees would vote the exact same way they voted that turned San Francisco into the dumpster fire that it is,” DeSantis said. “It is a problem because I do think there’s a class of voters who would come to Florida and they would continue to vote the same way.”

Both governors probably find that attacking the other polls well, and is good for fundraising. Both are rumored to want to run for president, so it helps improve their standing in the party to attack the other party’s standard-bearer. But Newsom is effectively running unopposed for governor this November, while DeSantis might have a fight on his hands with state agriculture commissioner Nikki Fried.

And on that front, DeSantis flexed today by proposing he would allow Floridians to carry guns without a permit, according to the New York Post. Fried pushed back, pretty cleverly, by yanking the gun permits of Floridians accused of participating in the January 6 insurrection.