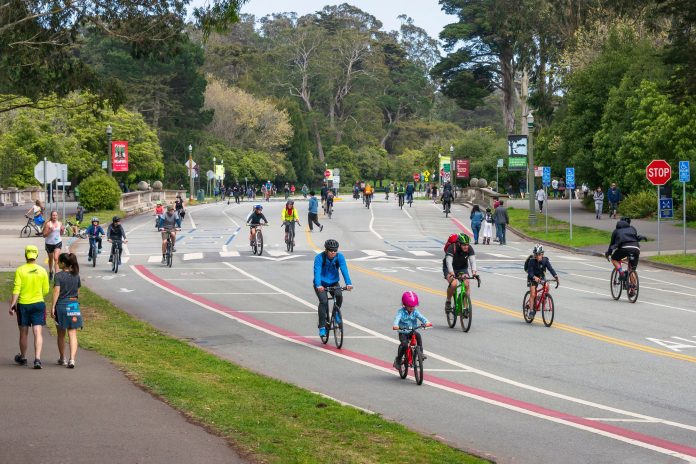 After debating the issue for 12 hours — including nine non-stop hours of public comment — the SF Board of Supervisors just gave permanent car-free status to a 1.5-mile span of JFK Drive in Golden Gate Park.

Even in a year with like a million different recall elections, San Francisco’s most raging public controversy seems to be the debate over making JFK Drive car-free. (OK maybe it is a close second behind the debate over making the Great Highway car-free). But the pandemic-era banning of cars from a 1.5-mile stretch of the Golden Gate Park main drag has proven so popular that Mayor Breed brought legislation to make car-free JFK permanent.

And on Tuesday, the SF Board of Supervisors approved Breed’s car-free JFK proposal by a 7-4 margin, after 12 hours of debate, and nine freaking hours of public comment. But the outcome was known the whole time, as the Chronicle’s J.D. Morris tweeted just after 9:30 Tuesday morning that “Supervisor Hillary Ronen just told me she will vote in favor of the mayor’s ordinance. car-free JFK now appears to have the 6-vote majority it needs to pass the SF Board of Supervisors.”

UPDATE: Supervisor Hillary Ronen just told me she will vote in favor of the mayor's ordinance. car-free JFK now appears to have the 6-vote majority it needs to pass the SF Board of Supervisors.

some supes still haven't weighed in, so the final vote count could be higher https://t.co/xr7CUTJ3a7

Ronen, and Supervisors Catherine Stefani and Aaron Peskin were the swing votes of supervisors who had not previously announced how they were voting. (Stefani also ended up voting for it, Peskin voted against.) Supervisors Connie Chan, Ahsha Safai, and Shamann Walton were already on record opposing, the rest of the board was already on record as supporting car-free JFK prior to Tuesday’s meeting.

“The proposal before us does not ‘close’ JFK. I’ve gotten thousands of emails saying ‘Don’t close JFK,” Supervisor Dean Prestion said before the vote. “The question is whether it will continue as a safe haven for pedestrians and cyclists, or whether it will return to being a high-injury, automobile-dominated street in the middle of Golden Gate Park.”

“Prohibiting or limiting the private automobile use of a road is not, in my opinion, ‘closing’ that road,” Preston continued. “In many ways, it’s opening it for greater community use.”

The fantastic @thehereafter serenades the Board of Supervisors with a song in support of car-free JFK Promenade. pic.twitter.com/88E8UEo1IK

As with any nine-freaking-hour public comment session at San Francisco City Hall, you had some… eccentrically delivered comments. Like the fellow above, who brought up his acoustic guitar with him and started his comment with, “I’d like to sing a song…” And then that is exactly what he did.

It might be fourth meal by the time this comes to a vote. https://t.co/BkTzrHNfYK

Supervisors who goof off during public comment is disrespectful IMHO. pic.twitter.com/Imqe1a5iTl

And you could kind of predict the vote based on the above video of an interaction during the marathon public-comment session. It doesn’t seem accurate to say that Supervisors Chan, Safai, and Walton are goofing off. This exchange went for several minutes, and did not appear frivolous. It seems more accurate that these three supervisors Chan, Safai, were hunkered down in a strategy session on Chan’s opposition plan.

There were two different competing plans for the JFK Drive; Breed’s entirely car-free plan, and Supervisor Connie Chan’s competing version that would allow one-way traffic between 8th Avenue and Transverse Drive, and two-way car traffic on Conservatory Drive behind the Conservatory of Flowers.

The more car-free plan is incredibly popular, as Rec and Parks showed slides Tuesday noting that car-free JFK Drive has north of 70% approval among San Franciscans.

They even broke down that support by neighborhood. As seen below, Lake Merced is the only neighborhood with a slim majority against car-free JFK. But the car-free majority support is a little softer in Chan and Supervisor Shamann Walton’s districts, and as such, they were the most vocal opposition.

Chan argued the results were demographically skewed. “Who filled out the survey?,” Chan said during Tuesday’s debate. “According to Rec and Parks data in October, 60.6% white. And then separately, 62.9% [had] no disabilities. These are the people who supported full closure of JFK Drive.”

She also alleged, “There are duplicates of IP addresses in the online survey,” and “About 2,000 of [votes] were duplicated from the same IP address.”

Walton also condemned the effort as a majority white-people movement. “The closure has done nothing to make Golden Gate Park more diverse,” he said Tuesday, fuming that it “says to a certain race of people here in San Francisco that if you weren’t welcome before, and you’re still not welcome, and that this space is reserved for a certain classes of people, certain races, certain people with means.”

“Some people want to make this strictly about cars versus no cars,” Walton said. “But the conversation has always been much bigger than that.”

Of course, that “conversation” may be influenced by de Young Museum lobbying efforts. The SF Standard reported last month that both supervisors Walton and Ahsha Safai came out against car-free JFK, coincidentally right after de Young and Academy of Sciences lobbyists contacted them. (It should be noted that the de Young and Academy of Sciences have a dedicated underground parking lot underneath the Music Concourse that is accessible from the opposite side of the park from JFK Drive.)

Over those arduous nine hours of public comment that seemed like they would never end, early on we heard from Church of 8 Wheels’ “Godfather of Skate,” Reverend David Miles.

This post has been updated with the final vote.

Related: Car-Free JFK Drive Gets Boost From Rec & Parks Report, Will Ultimately Be Up to Supes [SFist]