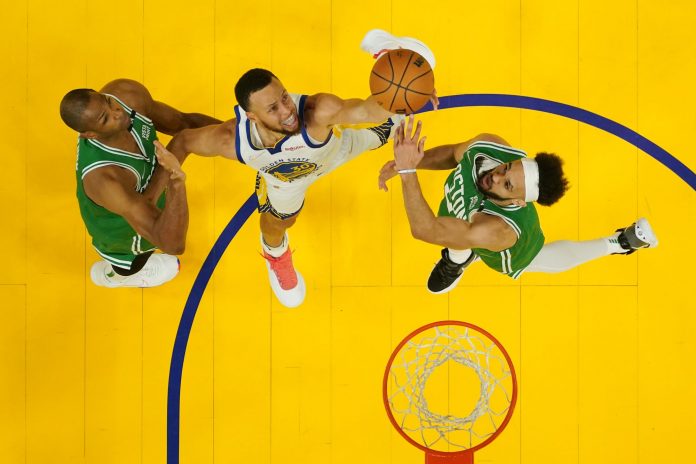 Golden State Plays Tight Defense, Gets Hot in Third Quarter to Win in Game 2; Even Series Heading to Boston

I was pretty nervous at the start of the fourth quarter of Game 2 last night, even after the Golden State Warriors had taken a decisive 23-point lead. Even after Stephen Curry and Jordan Poole were nailing deep three-pointers late in the third, and even after JP’s insane, I’ve-watched-it-110-times-already half-court buzzer beater to end the third quarter, I was still anxious for that last quarter.

We had seen the Warriors take a seemingly comfortable lead over the Boston Celtics into the fourth quarter of Game 1, and we’d seen the Dubs lose. Boston has shown that they are going to be a problem, that have any number of players who can shoot the lights out of the ball, and that even if they are down, the Celtics are never out.

There would, however, be no Game 1 repeat on Sunday. The Warriors had set a defensive tone immediately in Game 2, then activated their offensive weapons when it mattered most. The Dubs managed to bench most of their starters in the fourth quarter and seal the game for a 107-88 win to even the series at 1-1.

“We got off to a better start defensively where we left an imprint on the game, and they felt us a little bit more.” Steph Curry said during the on-floor, postgame interview. “Our third quarter was great, and we got enough separation that the fourth quarter was a little bit easier tonight.”

Two-way Steph. The tree-pointers make the highlight reels, but the defense sends teams to the mountaintop. Curry led all scorers (again) last night with 29 points, including 6 rebounds, 4 assists and 3 steals. (Photo by Ezra Shaw/Getty Images)

About 10 seconds into Game 2, Draymond Green tied up Al Horford shortly after the Celtics had won the tip, forcing a jump ball. The tone, set. The Warriors’ defense, stingy. That’s not to say that Boston didn’t pick up right where they left off in Game 1. Jaylen Brown was hot early, and the Jason Tatum we expected to see awakened, draining three pointers as the first half progressed.

The Celtics would lead by as much as nine points in the first, but the Warriors, constantly grinding away, were never far off the pace. Everyone wearing blue and gold kept finding Kevon Looney at the rim, and Stephen Curry kept finding his shots where he could. “What I thought was great is that he didn’t come out with guns blazing, like he did in Game 1,” said Draymond Green on his podcast. “He just allowed the game to come to him.”

Offensively, it wasn’t the greatest start for the Warriors. Klay Thompson looked cold, as did Jordan Poole. The Warriors would miss a few layups and free-throws, but still managed to eke out a one-point lead at the bitter end of the first quarter.

Gary Payton II has been one of the great stories of the 2021-22 Warriors’ run. His absence was felt acutely, as was his return to the lineup. (Photo by Ezra Shaw/Getty Images)

Oh yeah, Gary Payton II made a three-pointer in the first quarter. Oh yeah, Payton is back after missing about a month of the playoffs. “It was absolutely amazing to see Gary Payton II back on the floor with us,” Draymond said. “You immediately saw his impact on the game — defensively, his demeanor, his mind-set. He got a couple of put-backs, he got a couple of layups off drop-offs, hit the corner three.”

Jason Tatum, who led the Celtics in scoring with 28 points, went on to shoot very well from distance; he was 6-9 from three, with most of them falling in the first half. Derrick White still seemed to be riding the green Game 1 wave as well, shooting with the confidence of a veteran, and playing outstanding defense on his team of outstanding defenders. (The Warriors left White wide-open, however, for two out of his four made threes, but corrected those errors quickly.)

Draymond Green had 9 points, 5 rebounds and 7 assists on Sunday. No stat sheet, however, quantifies Green’s emotional impact on the game. (Photo by Ezra Shaw/Getty Images)

The game got chippy, and the Ts started flowing. Boston head-coach Ime Udoka also got a technical foul, probably for using some “magic words.” Draymond Green also got a T, and there was some shoving and words between him and any number of Celtics’ players. There would be discussion of “the line” that Draymond may or may not expertly walk — at one point flirting with another technical and a possible ejection — to bring fire and energy into the fight.

“. . . He tried to pull my pants down,” said Jaylen Brown at the postgame press conference. (After starting hot, Brown cooled off, finishing with 17 points on the night.) “I know what Draymond is going to do. They tried to put him on me, be physical, muck the game up, pull me, grab me and overall raise the intensity.”

The game was tied for a good part of the second quarter, and was 50-50 with about 15 seconds left, when Steph Curry launched a deep three. He missed, but Andrew Wiggins was under the basket, tipped the ball, no good, then tipped it again for the two points, putting Golden State up 52-50 at the half.

“We said that we needed to play with desperation. That’s what we did,” Steph Curry said in the on-floor, postgame interview. Wiggins would have 6 rebounds and 11 points on the night, but it was that play — to me — that represented the grinding, hard-fought nature of Golden State’s first half. If they were playing with desperation, then it manifested itself in those crashing-the-offensive-boards moments.

Breaking news: The Warriors had an amazing third quarter, outscoring the Celtics 35-14, though that dominance didn’t really show until around minute 32 of the frame. Stephen Curry hit back-to-back threes — one of them from way outside — with just over two minutes to play, making it 79-62.

And then it was Jordan Poole. He had 17 points on the night, shooting 6-14 from the field and 5-9 from three. After he hit two big threes late in the third quarter, then got the ball with about five seconds before the buzzer, then hoisted the aforementioned epic half-court shot, it almost didn’t matter. The damage had been done, the lead was up to 20.

The crowd quieted as they watched the Hail Mary sail through the air. The sharp sound of the net swishing was clearly audible before Chase Center erupted.

Despite this fan’s nervous moments in the fourth, Poole’s half-courter proved to be the final nail in the coffin.

Jordan Poole, seconds after nailing a buzzer-beating half-court shot at the end of the third quarter on Sunday. (Photo by Ezra Shaw/Getty Images)

All of the Celtics who were so deadly in Game 1 — Al Horford, Derrick White and Marcus Smart — were quiet in Game 2. “It was very important that we limited their role players that went off last game,” said Draymond Green of the three players just mentioned. “We didn’t give them open looks, and if the three just isn’t there, they’re not going to take them.”

Is this a scenario the Warriors are more comfortable with: Allowing Jason Tatum and Jaylen Brown to make their shots and make an impact, but to control the rest of Boston’s roster? Keep in mind that the Dubs managed to withstand the amazing play and roughly 33-point-per-game averages of Nikola Jokic, Ja Morant and Luka Doncic, while still controlling each of those respective series.

I think it was sometime before or during the Denver series, 500 interviews ago, when Draymond said something to the effect of, “You’re not going to stop superstars, but you can hope to stop the guys around them from having huge games.”