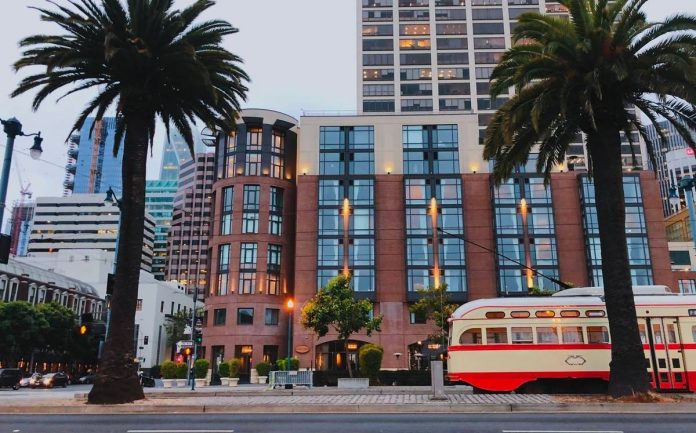 The SF hotel business is starting to boom again, and as the summer travel season kicks off, a new luxury hotel is making its debut on the Embarcadero, in the property that had been the Hotel Vitale since 2005. And the formerly buzzy happy-hour and brunch spot Americano has undergone a transformation as well.

Back in February 2020, we learned that the new owners of the Hotel Vitale property at 8 Mission Street, Pebblebrook Hotel Trust, had plans to renovate the barely 15-year-old hotel to the tune of $25 million. The pre-pandemic plan was to remain open during renovations, and to have an official relaunch under a new brand name in “early 2021.” The project was clearly delayed like everything else, and the hotel remained closed for the last two years, but as of Wednesday it is ready for guests again.

The new name is 1 Hotel San Francisco, and it’s the first Bay Area property being run by international luxury hotel chain SH Hotels & Resorts. The company has brands that are focused on environmental-consciousness, and they also run the Treehouse Hotel in London — with upcoming Treehouse locations opening in Miami and Manchester (UK).

A look inside the renovated rooms shows us a lot of raw wood accents, and tree branches as decor.

The hotel has 186 rooms and 14 suites, and like the Vitale before it, there’s a rooftop spa. As the Chronicle reports, 1 Hotels has also installed a produce garden and beehives on the roof.

They’re also all about the use of reclaimed wood, and the Chronicle notes that “The lobby floor is made from reclaimed lumber salvaged from barns and industrial buildings, while corridors are decked out in reclaimed redwood salvaged from the original San Francisco Bay Bridge.” The latter detail can’t be confirmed, and it’s not clear what part of the “original” Bay Bridge was made of wood — maybe they mean the scaffold used to construct the bridge?

The 221-seat restaurant formerly known as Americano is being reborn as Terrene, which sounds like it has a Latin American and Mexican tilt to the menu. And there’s an agave focus to the “zero-waste” cocktail menu as well.

“There’s a lot of historical influence of Mexico on the Bay Area,” says Matt Erickson, SH Hotels & Resorts’ president of food and beverage, in an all-too-obvious statement to the Chronicle. “The chef’s menu is inspired by nature, rooted in purpose and designed to share.” (The chef is not identified in the hotel’s press material or the Chronicle piece.)

The menu is not yet online, but some example side dishes are Star Route Farms carrots with tahini mousse “whipped up from leftover chickpea cooking liquid,” and a dish of mushrooms from Far West Fungi across the street at the Ferry Building, topped with “rooftop garden herbs and coriander berries.”

The Hotel Vitale opened in 2005, and the patio happy hour scene at Americano quickly became a happening evening destination for downtown singles.

The hotel changed hands twice since then, once in 2014 as the SF Business Times explains, and again when Pebblebrook acquired the company that had bought it in 2018.

With rooms overlooking the Bay Bridge and the Bay, the place became known as a prime viewing spot for fireworks during holiday events, and was a hub of activity during the Super Bowl 50 festivities in 2016.

1 Hotel San Francisco and Terrene are both open for business as of today, June 1, but reservations for Terrene don’t yet seem to be available online.