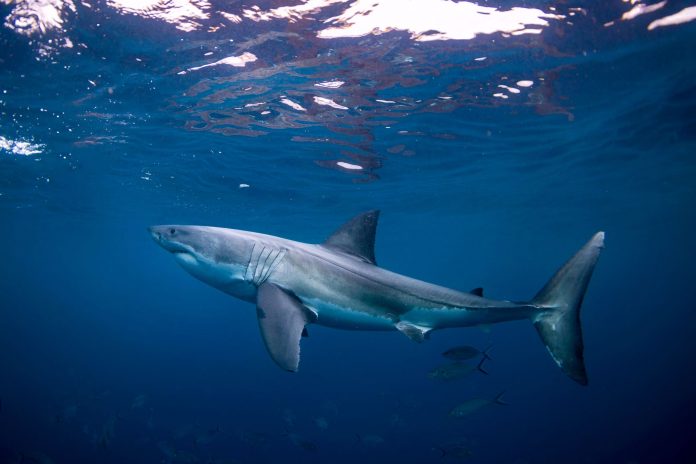 This week, 62-year-old Steve Bruemmer miraculously survived a shark attack that injured his leg, stomach, and arm. And as astounding? Those wounds were all caused by a single bite… from a great white shark that experts estimate was around 20 feet long.

Statistically, you’re far more likely to get involved in a car crash on your way to an ocean-side beach than being killed by a shark after entering said body of water — roughly 1 in 3,700,000. (For context: The average adult human has a 1 in 70 chance of dying from the common flu.) In the United States this year thus far, there have been about ten shark bites recorded; comparatively, over 5,000 people have died from contracting influenza during the same time period.

Happy first day of the summer season! As we head into the summer, it is important to brush up on white shark public safety resources. To find more information, please head over to our website. https://t.co/akm3bw4aeq pic.twitter.com/1z3KXUKsos

All this is to say that sharks shouldn’t be vilified for their very nature nor scapegoated as a major player in fatality figures. But considering how 62-year-old Steve Bruemmer of Monterey managed to, somehow, survive being bit by a shark estimated to be four feet longer than a Toyota Camry, the odds were definitely in his favor this week.

As reported by KRON4, Bruemmer was pulled from Monterey Bay Wednesday by a surf instructor, Heath Braddock, and two stand-up paddleboarders, Paul Bandy and Amy Johns, who launched into action after seeing him in distress.

Per the news outlet, Bandy is a Sacramento police officer and seasoned surfer, while Johns is an actively practicing nurse — again… the odds that day were very much in Bruemmer’s favor. Braddock, too, was at Lovers Point Beach — the stretch of coastline where Bruemmer had been swimming along — at exactly the right moment; he was leading an “ocean excursion: for a group of children visiting from Kansas who had never seen the Pacific before.

But the group’s excitable curiosity quickly turned into concerned panic when they witnessed Bruemmer being attacked by the shark some 300 feet from the coastline. Waving frantically and shouting “shark, shark!’ Brandy was at first wary of the call… until he noticed a pool of blood forming around him, causing the experienced surfer to spring into action.

Brandy managed to reach Bruemmer with two paddle boards and was eventually joined by Brandy before explaining the impromptu rescue plan: carefully careen the bleeding man onto the larger of the two paddle boards before swimming back with all their might.

The trio was met by paramedics back on shore, who applied tourniquets to prevent further blood loss. Though his wounds are severe, he’s expected to survive; the recovery process will be long, according to a swimmer who is close with Bruemmer.

As for the shark? The California Department of Fish and Wildlife’s forensics lab was able to form the conclusion that the shark that attacked Bruemmer was, in fact, a great white. And a massive one at that; the lab was able to deduce that the cartilaginous fish responsible for the attack was upwards of 20 feet long based on the bite’s size.

Because great white sharks — which are considered “vulnerable” to extinction due to habitat loss and illegal fishing practices — are sexually dimorphic in size, with females attaining larger weights and longer lengths than males, it’s likely the massive great white was female. But because of the sheer size and strength of great whites, even comparatively soft “exploratory bites,” as they’re called — investigative bites to determine if a decided prey item is edible or contains enough blubbery mass to exert the needed energy to both kill and consume the animal — can cause massive injuries to humans.

Had the bite been one meant to take down Bruemmer, it’s more than likely the flesh and bones between his bite marks would’ve been completely removed.

Currently, there are now posted shark warning signs along Pacific Grove beaches following Wednesday’s attack; swimmers were allowed back in the water on Saturday.

Police have since been monitoring the waters around the area using an aerial drone to see if the shark returned, but, so far, the massive great white has not been spotted again.