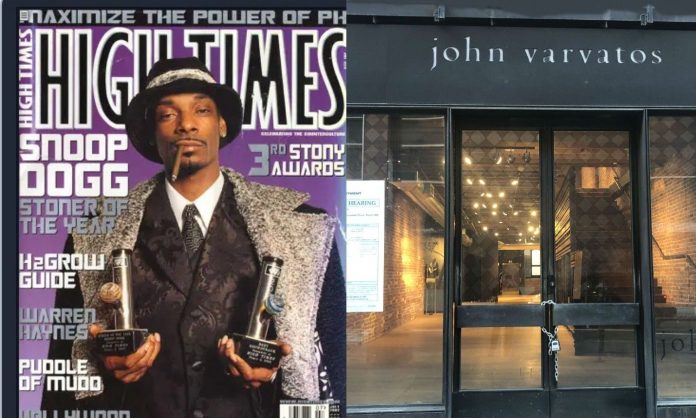 High Times magazine’s foray into cannabis dispensaries has been fraught with troubles, and a judge just ruled they have to pay up the $5 million in back rent they’ve racked up on the former John Varvatos space in Union Square.

SFist smelled something funny back in April 2020, when High Times magazine announced they were buying up 13 California cannabis dispensaries, including one in San Francisco, in a deal supposedly valued at $80 million. Parent company Hightimes Holding Corp.’ executive chairman Adam Levin bragged to Bloomberg at the time, “We will literally be next to a Chanel store.”

That tipped SFist off that he was referring to Union Square’s former John Varvatos space, a proposed Have a Heart dispensary that Chanel had actually battled, before both sides came to a “private agreement,” as we reported in February 2020.

The whole thing smelled skunky to us, because High Times was proposing to pay this $80 million primarily in Hightimes stock  — stock which did not even exist. Hightimes stock was supposed to IPO on the NASDAQ index, but they couldn’t pull that together, so in January 2020 settled for a penny-stock index called OTCQX, soliciting money from  longtime readers and small investors. According to their latest SEC filing, that Hightimes IPO still has not happened, and to this day, there is still no such thing as Hightimes stock.

High Times Holding, owner of the iconic @HIGH_TIMES_Mag, can’t close on its small-investor Regulation A initial public offering until its audited financials for 2019 are filed.https://t.co/l1qx2BKDo8

And now we learn that rent has not been paid on the former John Varvatos space at 152 Geary Street the whole time since this “transaction” was announced. Industry trade publication Cannabis Business Law reports that a California Superior Court judge has ruled that High Times must pay $5 million in back rent to the company that owns the space, Thor Equities.

Since the dawn of the legal cannabis era, High Times has developed a reputation as a Green Rush gold-digger that acquires properties they cannot actually pay for. (Politico has an excellent longform writeup of High Times’ numerous deals gone bad.) Here in northern California, their acquisition of the Humboldt County music festival Reggae on the River resulted in its immediate cancellation, when High Times canceled the event without explanation in June 2019.

When High Times announced they had “acquired” those 13 dispensaries in 2020, it was a smoke-and-mirrors announcement anyway. Only five of the 13 dispensaries were up and running, the rest were just proposed dispensaries that still did not have state or local cannabis retail permits. They have since opened a sixth, on Oakland’s Oakport Street near San Leandro.

So that’s one thing that has gone right for the company. But considering the $5 million rent bill and multiple other High Times ventures that have gone up in smoke, anyone who invested in High Times hoping for fat sacks will likely get little more than seeds and stems for the time being.