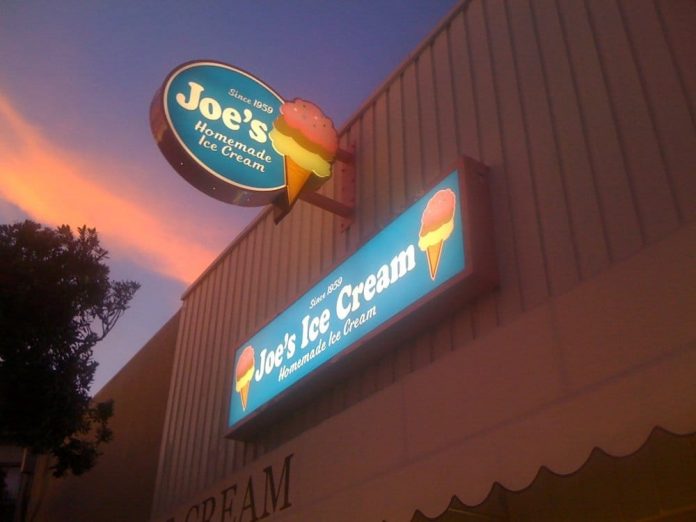 A late April “Ice Cream With a Cop” event in the Inner Richmond turned into a hostile confrontation, with video now surfacing of protesters with a megaphone swarming officers and making the event a rocky road.

Back when that whole fnnch controversy was hitting the fan a year ago, one tipping point was a confrontation video posted to Instagram while graffiti was being cleaned off a honey bear mural at the LGBT Center. That video was posted by an activist, rapper, and sometimes Equipto collaborator Adroa Anderson, who goes by Doggtown Dro, and was also in the news for allegedly punching someone’s teeth out at a Trumper “free speech” rally in October 2020.

This Doggtown Dro surfaced again at the “Ice Cream with a Cop” event at Joe’s Ice Cream in the Inner Richmond. As seen below, that event promised a “free single scoop of ice cream courtesy of the SFPD” and a chance to “meet & chat [with] community SFPD officers.”

SATURDAY! Come join @SFPDRichmond & SF SAFE for Ice Cream with a Cop, 4/30 from 1-3 p.m. at Joe’s Ice Cream, 5420 Geary Blvd. Discuss safety issues that matter to you with local officers over your favorite flavor! pic.twitter.com/Hw5v6L0etV

Boy did that not go as planned! SFGate reports that a group of protesters yelling “Fuck the Police” soon disrupted the event. As the (clearly highly edited) video below posted to Doggtown Dro’s Instagram account shows, it’s similar to the fnnch confrontation, with profanity, shouting, and what appears to the initiating of physical contact and then screaming back “Don’t touch me!” Except this time, it’s around children.

The “on trial for murder” comment refers to the upcoming homicide trial in the 2017 police shooting of Keita O’Neil. That trial was set to start this week, though Mission Local reports that it will be delayed. The megaphoner, presumably Anderson, says “The auntie of Keita O’Neil is on this speakerphone, can you speak auntie?” Yet oddly, for whatever reason, her comments are then edited out of the video after she identifies herself.

In the follow-up video above, megaphone guy yells “Where are the brown people? Zero.” He yells this at District 1 supervisor Connie Chan, who is Asian-American.

“I don’t want to be part of political issues,” Joe’s Ice Cream co-owner Alice Kim told SFGate. “I’m really sad and not comfortable because people are sending us messages saying, ‘you should go out of business.’ The world can be scary. Every day I watch the video. I’m still having all those nightmares of people coming and harassing my family. At this moment, I’m a little shaken, too.”

But there is reason to believe that the organizers of “Ice Cream with a Cop” had ulterior political motives. As SFGate points out, “the lead organizer who put the event together was community member Mark Dietrich, who has written op-eds on burglaries in the Richmond District and is often quoted in news stories on San Francisco crime,” adding that “His social media pages indicate he’s a strong supporter of recalling Chesa Boudin.”

We heard from SFPD, the Mayor’s Office, and national expert & founder of Civil Rights Corps @equalityAlec who spoke about “copaganda,” the term used by advocates to describe media manipulation by law enforcement agencies to influence public opinion regarding police/policing.

But get ready to hear much more about this term “copaganda.” Mayor London Breed just appointed the SFPD’s Director of Strategic Communications (that is, head of public relations) as District 6 supervisor. And perhaps coincidentally, perhaps not, in the days leading up to this, Supervisor Dean Preston held hearings that were highly critical of that very Strategic Communications Department and their “copaganda.”

In other words, this is about much more than an ice cream social, and there are many agendas swirling at City Hall about police communications, criminal justice, and PR campaigns.

Related: Fnnch Mural Painted Over at LGBT Center; Honey Bears Targeted With Graffiti Because of Association With Gentrification [SFist]

Facebook
Twitter
Pinterest
WhatsApp
Previous articleUCSF’s Dr. Wachter on COVID Watch After Wife Tests Positive While Traveling
Next articleDay Around the Bay: Steve Kerr Out With COVID, Ja Morant Out With Knee Injury for Warriors-Grizzlies Game 4