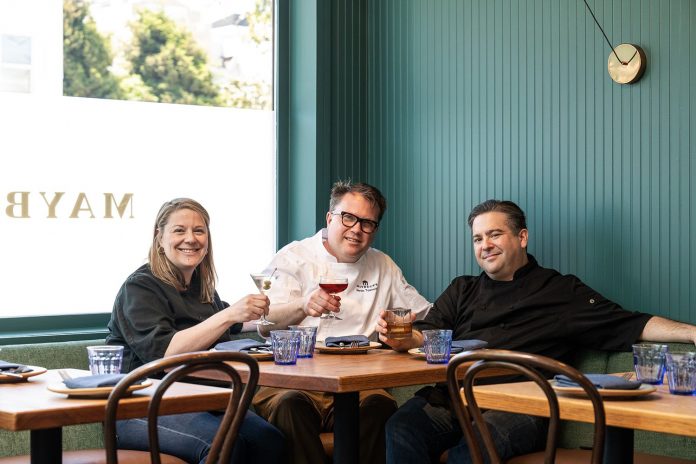 Maybeck’s Set to Reopen In the Marina With New Menu, New Partners From Baker & Banker

Maybeck’s, the cozy Marina restaurant the first opened its doors in 2015, largely flew under the radar of the city at large up until the pandemic began while becoming a solid neighborhood favorite.

Local chef Ryan Scott named it as a favorite on Check, Please! in 2017. A Wednesday night beef Wellington special won some Michael Bauer accolades that year and the Chronicle subsequently published chef de cuisine Blake Askew’s recipe, but when the pandemic hit the place went dark, and its future has seemed uncertain. But now we learn that two chefs who have been out of the scene for a couple of years, the husband and wife team of Lori Baker and Jeff Banker, have joined forces with original Maybeck’s partner and chef Aaron Toensing, and the trio is relaunching Maybeck’s later this month with a refreshed interior and a revamped menu — and a new take on that beef Wellington.

Toensing’s original partner in the business, Erik Lowe, appears to have stepped away, and Toensing brought in longtime friends Baker and Banker as partners. The couple, as local foodinistas may recall, previously operated Baker & Banker in the Pac Heights space that’s now home to Octavia, in the few years after Quince vacated it, and were well known for their creative, homey, and comforting fare and Baker’s excellent pastry work — Banker previously served as executive chef at Home restaurant in the Castro, and worked at Traci Des Jardins’ Acme Chophouse.

Baker & Banker closed in 2014, and Banker went on to lead the kitchen at Bluestem Brasserie downtown for a time. But now the couple has come in as partners with Toensing, and Baker tells Eater that they’re aiming to bring some lighter and less meat-centric fare to Maybeck’s when it reopens June 30.

“The whole idea is that it’s more thoughtful,” Baker said to Eater. “I feel that it’s harder and harder to find thoughtfulness [these days] at an affordable price.”

The beef Wellington will return as a mini version, made for two people and only as a Wednesday night special. And the new burger on the menu will be of the double-patty smashburger sort, served with American cheese and “special sauce.”

Returning from the old menu will be a radiatore Bolognese, but this version will be smokier and garnished with fermented chili oil.

Baker is also working on a Brooklyn blackout cake for dessert that will be served with chocolate stout egg cream.

The interior of the space is getting a new look with a new marble chef’s counter, new wood tables, copper accents to match the copper bar, and a new deep green color scheme. There will also be a new private dining room, and a glass enclosed wine shop.

And the dishware is getting made over as well, with all new, handmade ceramic dishes from MMclay and San Francisco-based ceramic artist MaryMar Keenan.

Look for Maybeck’s to swing back open officially on June 30, and you can start making reservations via OpenTable now.

Facebook
Twitter
Pinterest
WhatsApp
Previous articleQuick Heatwave On the Way for Thursday and Friday, East Bay Temps Could Exceed 100 Degrees
Next articleIn Ominous Sign for This Fire Season, Two Brush Fires Break Out Next to Homes In East Bay Subdivisions In One Day