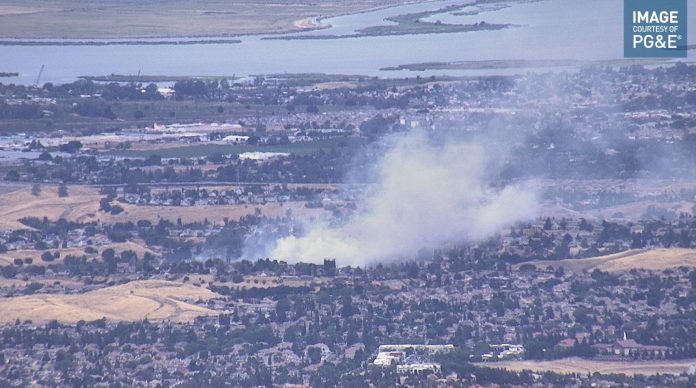 In Ominous Sign for This Fire Season, Two Brush Fires Break Out Next to Homes In East Bay Subdivisions In One Day

Firefighters in Contra Costa County were battling two vegetation fires Wednesday that broke out dangerously close to densely populated subdivisions, in Antioch and in Bay Point. And a third fire also broke out today in Livermore.

This fire season is already shaping up to be a doozy, after another drier-than-average winter and with early warning signs via small fires getting whipped up across the East and North Bay barely a week into June.

On Wednesday, two brush fires broke out in Contra Costa County. As NBC Bay Area reports, a two-alarm blaze broke out around 2 p.m. and was threatening homes along Palomar Court and near San Elijo Court in Antioch — though firefighters appeared to have it under control within about 20 minutes.

“Conditions very dangerous, report all fires immediately to 911,” tweeted Con Fire after that blaze was contained.

A second fire broke out in Bay Point near Mallard Slough Road, and that was first reported at 2:30 p.m. The status of that fire is not known, but no evacuation orders had been made as of 3:30 p.m.

Firefighters get the upper hand on brush fire burning near homes in Antioch. https://t.co/MFm4tHfwRD pic.twitter.com/15xPCZHcSK

Meanwhile, around 1:30 p.m., a 2- to 3-acre vegetation fire was reported near Greenville Road in Livermore, and visible from the I-580 freeway.

CalFire SCU was on the scene and tweeted “use caution if you are traveling in the area.”

Firefighters are responding to a vegetation fire in the vicinity of I580 x Greenville Rd. reported to be 2-3 acres in size. Fire is visible from the freeway, use caution if you are traveling in the area. #GreenInc pic.twitter.com/65vPBci5NS