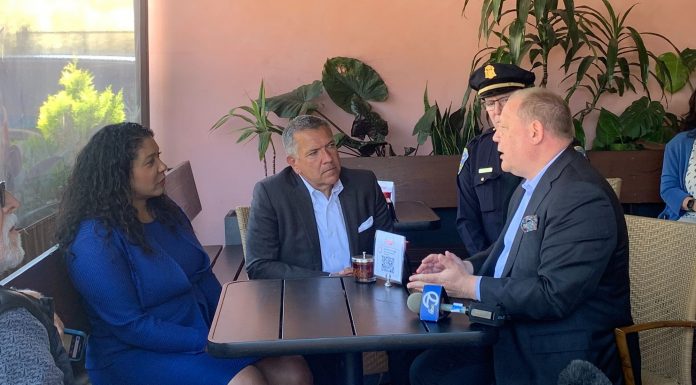 In the wake of Tuesday’s recall of District Attorney Chesa Boudin, London Breed struck a conciliatory “Now is a time for healing” note, and served word salad designed to appeal to both sides.

The national media thinkpiece ink has not yet dried on Tuesday’s recall of DA Chesa Boudin, and while there are still nearly 100,000 mail-in and provisional votes yet to be counted, it’s pretty implausible that Boudin can make up his nearly 25,000-point gap when already-counted ballots have run roughly 60-40 against him. Mayor London Breed, who gets to appoint Boudin’s replacement, spoke for the first time Wednesday after six months of vacillating remarks on the recall: “Oh, I do know how I’m going to vote!” (December 2021), “”I haven’t made a decision in this recall election” (March 2022), and per the Chronicle today, “Breed also declined to tell reporters how she voted on the recall.”

“Now is a time for healing,” Breed told reporters Wednesday. That makes sense, it is wise for her to position herself above the fray while emotions are still running high. But see if you can make sense of the both-sidesism pablum with which she followed that up, captured below by KQED.

“This does not mean that criminal justice reform in San Francisco is going anywhere. It does not mean that there will be all of a sudden a significant setback,” Breed said. “And so this is something we care about. We want justice, but we also want to make sure that people have a second chance to live an effective life, to live in San Francisco in a way that allows them to thrive and not to have to cross that line. In fact, in our budget over the years we’ve always invested in programs that support the community. We’ve invested in programs that help to elevate the community.”

It may have been no accident Breed was flanked by her own handpicked appointed Supervisor Matt Dorsey, and that her first post-recall appearance was with the recently paid SFPD staffer who publicly endorsed the recall. Breed likely knew that the questions coming her way would be about her choice of Boudin’s successor, and she again picked her words carefully and with great vagueness.

“When you make these decisions, you have to be comfortable with the fact that some people are gonna agree with you and some are gonna disagree,” the Chronicle quotes Breed as saying. “But at the end of the day, when you’re in charge of the city, you have to be decisive and you have to stand by what you do and hope that people will understand it and respect it.”

The Chron floats the possibility of Breed appointing ex-Boudin staffer Brooke Jenkins, who appeared in ads promoting the recall. But it seems a higher likelihood Breed would appoint District 2 supervisor Catherine Stefani, who very clearly wants the job, and would also give Breed the douple-dip of appointing a DA along with another faithful ally on the Board of Supervisors, both of whom would owe their jobs to London Breed.

Related: San Francisco Voters Recall DA Chesa Boudin and Everyone Including Ann Coulter Has Something to Say About It [SFist]

Facebook
Twitter
Pinterest
WhatsApp
Previous articleIn Ominous Sign for This Fire Season, Two Brush Fires Break Out Next to Homes In East Bay Subdivisions In One Day
Next articleDay Around the Bay: Motorcyclist Killed In SF Freeway Accident Identified