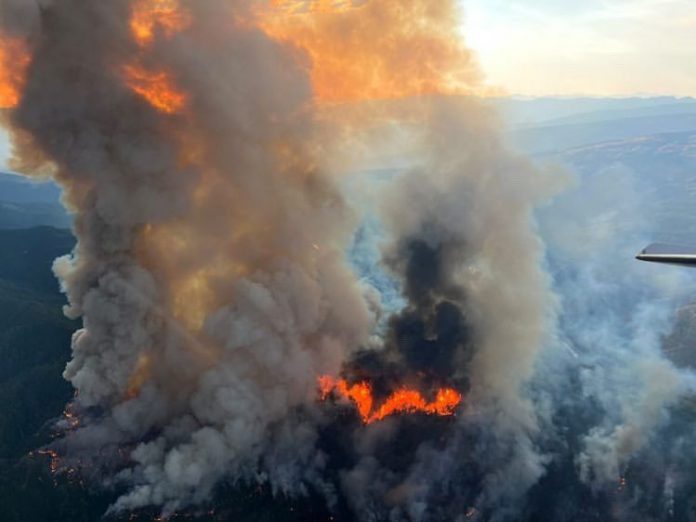 Around 2 p.m. Friday, a wildfire was reported to have started near Highway 96 and McKinney Creek Road, southwest of Klamath River in Siskiyou County. Now burning more than 51,000 acres — with 0% of the wildfire contained — the McKinney Fire is now, by far, the largest fire to burn in CA this year.

Earlier this week, we reported on the still-growing Oak Fire in Mariposa County, which currently is nearly 20,000 acres in size and around 64% contained, was poised to bring smoke and haze into the Bay Area. At that time, it was easily the most severe blaze under CAL FIRE’s incident report for 2022; the Oak Fire is still about four times larger than Lost Lake Fire burning in Riverside County, which was, up until then, the fire that burned through the most acreage this year.

#RedFlagWarning remains in effect for Siskiyou County from 2 pm to 11pm for abundant lightning on dry fuels. This is #CriticalFireWeather so use caution outdoors. More tips: https://t.co/upBwccxXFO pic.twitter.com/2M6oRa24bz

This, however, has all changed since the McKinney Fire began burning near the Oregon and California border on Friday. Since then, the wildfire has exploded to over 51,000 acres in size — or, to put it in another way, well over twice the size of the Oak Fire.

A wildfire in California exploded in size overnight amid windy, hot conditions and was quickly encroaching on neighborhoods, forcing evacuation orders for over 100 homes Saturday.

As reported by NBC Bay Area, the fast-moving fire inside California’s Klamath National Forest  went from bruning just over a single square mile on Friday to now engulfing over 80 square miles, all while burning down at least a dozen residences. Wildlife, too, has been observed fleeing the area to avoid the flames.

Governor  Newsom declared a state of emergency yesterday as the fire intensified, crossing over 30,000 acres at that time. Per the news outlet, the proclamation now allows Newsom more flexibility to make emergency response and recovery effort decisions, which also included increased access to federal aid.

The @CAgovernor just proclaimed a state of emergency for #SiskiyouCo due to the #McKinneyFire and others. This action helps access federal aid and unlock state resources. Currently, almost 2,000 residents are under #evacuation orders and 200+ more are under #evacuation warnings. pic.twitter.com/OM6XIKw6Su

A wildfire in California exploded in size overnight amid windy, hot conditions and was quickly encroaching on neighborhoods, forcing evacuation orders for over 100 homes Saturday.

There’s no single reason why the McKinney Fire was able to experience such explosive growth so quickly. Like we said before: Ongoing drought conditions have emptied reservoirs and created a bulild-up of dead ground vegetation, all in the presence of hotter-than-average temperatures and low humidity levels affecting much of Northern California.

Combine the McKinney Fire’s intensity with the difficult-to-access environment it’s burning in, and it’s no wonder why it’s being called a “very dangerous fire.”

“It’s a very dangerous fire — the geography there is steep and rugged, and this particular area hasn’t burned in a while,” said Tom Stokesberry, a spokesman with the U.S. Forest Service for the region.

The blaze continues to threaten critical infrastructure in the area. As of publishing, almost 2,000 residents of Siskiyou County have been forced to flee their homes; dozens of hikers on a nearby stretch of the Pacific Crest Trail (PCT) were also evacuated, per SFGate. As such, the National Forest Service has now closed 110 miles of the PCT from not until at least August 30.

But with such little containment recorded, the fire is expected to continue expanding virtually unchecked — and cause additional evacuations. It’s why residents of the country are now being asked to be ready to flee at any given moment.

“We’re asking residents all over the area to be ready,” Siskiyou County Sheriff’s Office spokesperson Courtney Kreider said, per CNN. “Last night we were pushing out evacuations about every hour, and there are large portions of the county that are in warning areas.”

For more information on the McKinney Fire’s growth, including updated evacuation orders and figures around structures either damaged or destroyed by the blaze, visit fire.ca.gov/incidents/2022/7/29/mckinney-fire.