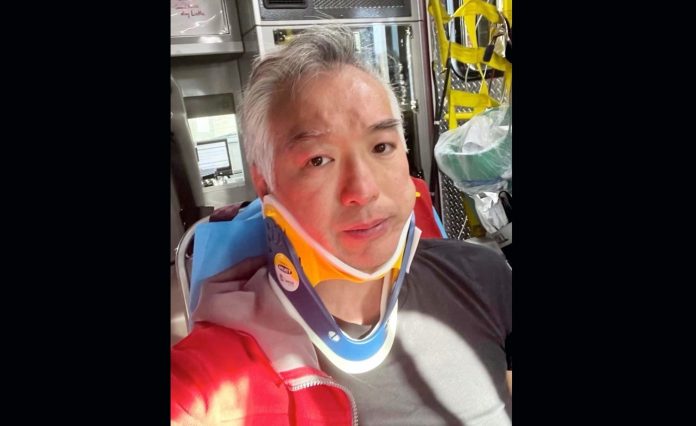 Millbrae City Councilmember Hit on Head by Brick at Lands End, Says It Was Racially Motivated

Millbrae’s first Hong Kongese-American city councilperson Anders Fung had a brick dropped on his head Saturday in a visit to Lands End, and while he’s expected to fully recover from serious head and neck injuries, he believes he was targeted because of his ethnicity.

Hong Kong-born Millbrae city councilmember Anders Fung is the “the first 1st generation Chinese American immigrant to serve in the Millbrae City Council” according to his LinkedIn, but today finds himself in the news for a far more disturbing reason.  The Chronicle reports that on a Saturday visit to San Francisco’s Lands End park with his wife and two children, Fung had a concrete brick dropped on his head from above. The brick being dropped was apparently not an accident, and we do have photos of two suspects accused of dropping the brick on him in an allegedly intentional assault.

“Today, I was violently attacked near Lands End in the San Francisco Richmond district,” Fung says in the Facebook post above (which, fair warning, also has some graphic photos of his stitches.) “2 young men in hoodies threw a concrete block and struck me on my head. When my family confronted the perpetrators demanding them to stop, one of them gave my family an obscene hand gesture before fleeing the crime scene.”

“As a community, public safety is paramount to our collective success. We must stand firm against all senseless violence and hate,” he adds. “Our people deserve a safe living environment.”

While media reports are describing this as an “apparent hate crime,” there is no indication that law enforcement is currently classifying it as such. (And since the incident happened in the Golden Gate Park National Recreation Area, it’s under the jurisdiction of park police rather than SFPD.) And while KTVU reports Fung is “stopping short of calling the incident a hate crime,” Fung told KTVU on Sunday that “what is undeniable in what happened, an AAPI elected official was assaulted yesterday.”

While fortunately Fung was the only individual harmed in the incident, he does have “a half-dozen metal stitches” in his head, according to the Chronicle, and per his Facebook post, “I sustained a head injury with a 2 inch laceration, and a cervical disc herniation around my neck. The doctor performed an MRI and CT scan, and also stitched up my wound. The pain is severe but I am expected to have a full recovery.”

We do have a photo taken from behind of the alleged suspects getting away on foot, as seen above. If you have any information about the incident, you’re asked to contact the USPP Criminal Investigation Unit at 415-561-5151, or via email SFFO_CIU@nps.gov.

Facebook
Twitter
Pinterest
WhatsApp
Previous articlePG&E Not Only Caused the Massive Dixie Fire, a New Report Says It Also Was ‘Excessively Delayed’ In Responding to It
Next articleBay Area Toll Authority to Crack Down on Unpaid Bridge Tolls With Penalties and Liens on Registrations