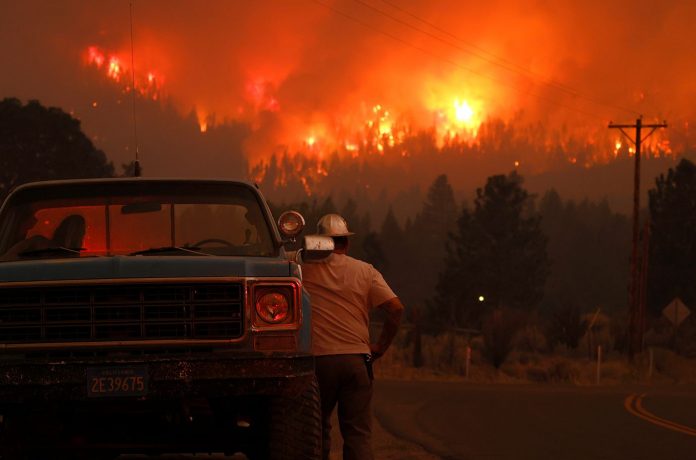 PG&E Not Only Caused the Massive Dixie Fire, a New Report Says It Also Was ‘Excessively Delayed’ In Responding to It

PG&E is once again on the defensive following the release of a state report on the 2021 Dixie Fire that not only suggests the utility was negligent in its tree-removal program, which helped spark the fire, but also that their response the day of the fire was “excessively delayed.”

Three years after PG&E equipment sparked the deadliest wildfire in state history, some other PG&E equipment sparked what would become the single largest wildfire in state history, spanning five different counties and burning 963,300 acres. (The 2020 August Complex fires topped 1 million acres, but were separate, linked fires caused by lightning strikes.) And a new report by Cal Fire suggests that PG&E took far too long to a detected problem on one of its transmission lines, sending a so-called troubleman out to inspect the line some 10 hours after the problem was noticed.

“The fire ignited as a result of a 65′ tall, damaged and decayed Douglas Fir tree when it fell and contacted conductors at approximately 6:48 a.m. [on July 13, 2021],” Cal Fire investigators say. The tree then continued to be energized by a “high impedance fault,” the investigators say, arcing and igniting “a dry and receptive fuel bed over the course of 10 hours.”

The troubleman would not arrive on the scene and report the fire until 4:55 p.m. that day, which Cal Fire calls an “excessively delayed response to the fault.” And by that time, investigators say, “the fire was too large for him to contain and a 911 response was requested.”

The report is damning, clearly, and marks the first time that we have heard about this ten-hour delay between PG&E detecting the failure on the power line, and the troubleman observing the fire that was already underway. PG&E fessed up very quickly in the case of this fire, making a public statement less than a week after the fire began explaining how the utility’s employee had first seen the fire at the base of one of their transmission poles near Cresta Dam.

PG&E has attached its own rebuttal statement to the state report, which insists both that “the tree was alive, vital and growing vertically at the time of failure,” and that the troubleman “worked diligently for hours to get to the site” of the power lines and “fought the fire heroically by himself before Cal Fire arrived.”

PG&E also claims that the worker was “turned away by a county road crew” while trying to get to the site of the lines, and that it was a “blue-sky day, and there was indication of an emergency” until the troubleman arrived and saw the beginnings of the fire.

“Our vegetation management program inspects 100,000 miles of overhead powerlines every year,” PG&E says in its defense. “Inspectors patrolled this area with the tree multiple times over the years before the fire, including as recently as November 2020 and January 2021, and concluded the tree did not need to be removed.”

The Cal Fire investigators said that the tree in question “had visible outwards signs” of damage and decay that “would have been noticeable at the ground level by inspectors… without extraordinary effort” if they had been inspecting it before the fire.

So, we now have a they-said/they-said situation about the condition of the tree that fell, but clearly most of us know better than to trust what PG&E claims at this point — and it’s doubtful that the federal judge who tried the company for criminal neglect in connection with previous wildfires will have much sympathy either.

While massive in scale, the Dixie Fire was not as destructive, relatively, as some other recent wildfires during these past few crazy fire years in California. While burning across parts of Butte, Plumas, Lassen, Tehama and Shasta counties and not being fully contained for over three months, the Dixie Fire destroyed only 1,311 structures — compared to the much briefer and smaller Camp Fire, which destroyed 18,800 structures and killed 85 people in and around the town of Paradise.

The majority of the Dixie Fire’s devastation occurred early, when the fire burned through the historic communities of Indian Falls and Greenville, the latter about three weeks after the blaze the began. The fire also killed three firefighters, and caused injury to three others.

Still, the fire proved to be the most expensive to fight in U.S. history, due in part to how stretched-thin various firefighting agencies were, leading to the hiring of expensive local and private firefighters by the U.S. Forest Service.

PG&E now says that after the lessons of the Dixie Fire it installed a new safety setting that automatically shuts off power to a line in a fire-prone area when a fault is detected like the one detected here is — and the company says that had this setting been in place before (why wasn’t it?!), this fire would have been prevented.

PG&E won’t be tried for criminal neglect again, at least for this fire, following agreements it struck with six counties in April, paying settlements totaling $55 million. Those settlements absolve the company of future charges for the Dixie Fire and the 2019 Kincade Fire in Sonoma County — two fires sparked by PG&E equipment that were not covered in the previous federal trial.

Confirmation of PG&E’s responsibility for the Dixie Fire came from Cal Fire in January. This latest report, which was completed at that time, was just forwarded to the Butte County District Attorney’s Office, as the East Bay Times reports, and not shared publicly until now.

PG&E says only that they believed they acted as a “prudent operator” in this situation, and that the new report “does not change our perspective.”

Related: The Dixie Fire Was Officially the Most Expensive to Fight in U.S. History

Top image: A resident looks on as the Dixie fire burns into a neighborhood on August 16, 2021 near Janesville, California. The Dixie fire has burned over 578,000 acres, has destroyed over 1,000 homes and threatens thousands more. The fire, the largest single fire in California state history, is 31 percent contained. (Photo by Justin Sullivan/Getty Images)