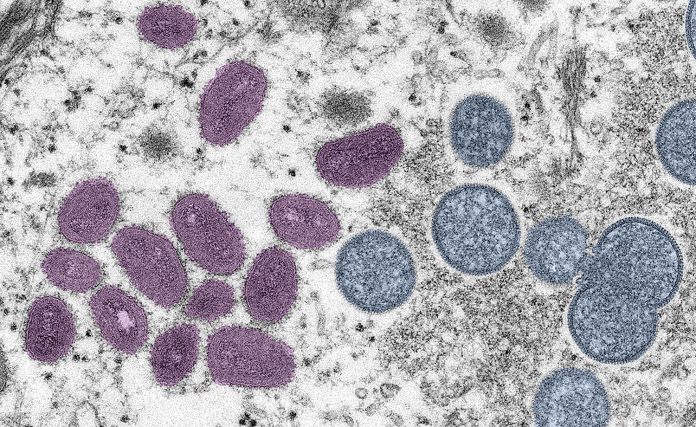 Monkeypox Likely to Have Spread During SF Pride; 16 Total Cases In the City As of Last Week

As an outbreak of monkeypox infections grips the gay communities of Germany, Spain, and the UK, there are increasing reports of cases here in the U.S. and in the Bay Area — also primarily among gay and bisexual men.

Cases of monkeypox, none of which have been fatal so far, tripled in Germany in the last two weeks of June, with Berlin being a center of the outbreak there. (For perspective, there were only three recorded cases in Germany on May 21, and there were 836 cases there as of last week. SF recorded its first “probable” case on June 4.) As sometimes SF resident Leo Herrera has been reporting in a podcast on Instagram, talk of monkeypox has been frequent in Berlin queer bars in recent days, as more and more people know friends who have been infected.

Monkeypox is typically spread by close, skin-to-skin contact, often but not always sexual contact, and symptoms can take two to three weeks to appear. The initial outbreak in Berlin was blamed on two big parties that happened in May — one on the island of Gran Canaria in Spain in early May, and another in Berlin itself. After the UK and Germany, Spain currently has the third highest count of confirmed monkeypox cases in Europe to date.

Over the July Fourth holiday weekend, one group that threw a party over Pride weekend attended primarily by gay men sent out an alert to party attendees about a plausible case of monkeypox among them. The Burning Man camp known as Comfort & Joy throws the annual Afterglow party on Pride weekend, and Afterglow attendees were informed Monday about the case.

Following that alert, another large party that occurred Friday of Pride weekend, Electroluxx, put out a message Tuesday on its social media informing attendees that one attendee has “self-reported having monkeypox.”

Testing services and vaccines are available through the San Francisco Department of Public Health Immunization Clinic (415-554-2525), SF City Clinic (356 7th Street, 628-217-6600), and Strut in the Castro (415-581-1600), and those who think or know that they’ve been exposed are encouraged to seek out these services. In addition to those who have had known, direct contact with an infected person, anyone who attended one of these events is eligible to get the Jynneos vaccine, which is considered a safe and effective treatment/preventative measure.

As ABC 7 reported last week, monkeypox has been detected in Bay Area wastewater, and experts expect cases to grow quickly here and elsewhere as they have in Europe. Contact tracing and isolation are the best defenses against a wider outbreak, with flu-like symptoms being the first sign of disease. Most cases are mild, but they do often come with pustules on the skin. Dr. Peter Chin-Hong explained to ABC 7 today that more severe cases involve infections centered in the eyes, mouth, or anus.

The SF Department of Public Health had confirmed 16 cases of monkeypox in the city as of June 29, including six added last week.

The department is not discouraging people from having sex, however it says, “Having sex or close physical contact with multiple people can put you at higher risk for monkeypox if it is spreading in the community.” They also advise wearing long sleeves when moving through crowded spaces, and “Talk[ing] to close physical and sexual contacts about their general health like recent rashes or sores.”

Top image: Digitally-colorized electron microscopic (EM) image depicting a monkeypox virion (virus particle), obtained from a clinical sample associated with a 2003 prairie dog outbreak, published June 6, 2022. The image depicts a thin section image from a human skin sample. On the left are mature, oval-shaped virus particles, and on the right are the crescents and spherical particles of immature virions. Courtesy CDC/Goldsmith at al. (Photo via Smith Collection/Gado/Getty Images)