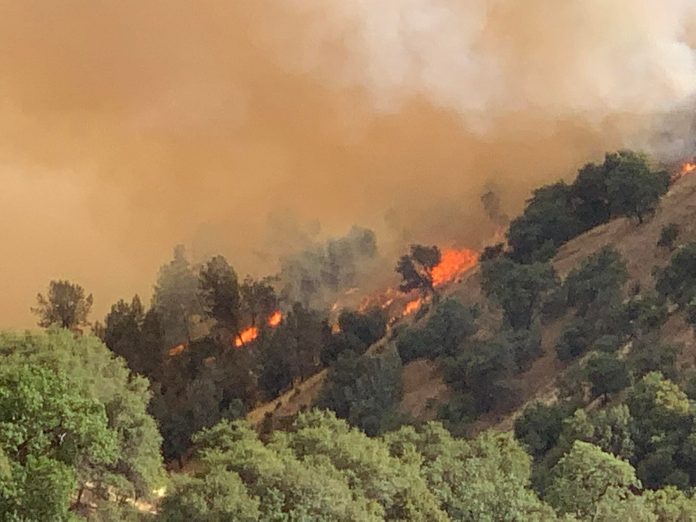 Amador County Wildfire Raging at Nearly 3,500 Acres, About 15,000 People Are Without Power

A sudden wildfire in Amador County forced nearly 100 July 4th beachgoers to coop up inside a PG&E power plant for safety on Monday afternoon and evening. While they’re now evacuated, the fire is still growing and PG&E infrastructure has a “number of assets potentially at risk” in what’s been dubbed the Electra Fire.

Somewhere between 85 to 100 people enjoying July 4th at a beach facility along the North Fork Mokelumne River in Amador County had just about the most dystopian 2022 Independence Day California experience one can imagine. A giant wildfire broke out sometime before 4 p.m., blocking roads, and the crowd had to spend their July 4 sheltering for safety inside a PG&E powerhouse.

Cal Fire has expanded the mandatory evacuation and warning zones for the #ElectraFire in Amador County: https://t.co/Ah3wYQ3SD3

Sacramento’s KOVR reports that “John Sullivan, who was inside the powerhouse, told CBS13 over the phone that he was at the beach with his wife and children celebrating the Fourth of July holiday when they saw what looked like a bonfire get out of control. While people tried to leave, the fire blocked the road out, and a deputy on the scene evacuated them to the power plant.”

“Sullivan said fire officials planned to let the fire pass before letting people leave the power plant, but the road became blocked by fire equipment and fallen trees,” the station adds. “Still, those inside the plant remained hopeful they’d soon return home, even as nightfall approached.”

Those folks did manage to get out of that nightmare at about 9:30 p.m. Monday night. But the video above from the CAL FIRE Amador-El Dorado Unit shows what the Chronicle reports has been dubbed the Electra Fire, which has grown to  about 3,000 acres of as of Tuesday morning, and whose mandatory evacuation order were just expanded Tuesday afternoon in the area about 50 miles southwest of Sacramento.

The Bay Area News Group provides this evacuation map, with the red area being mandatory, and the yellow area being under an evacuation warning. Warnings extend across the Amador County line into Calaveras County. As of early Tuesday afternoon the fire appears to have grown to 3,455 acres.

Confirmed spot fire from earlier, 10 acres across a road (unknown what exact road it is). Expecting some small runs near Ponderosa road, inquiring about firing ops near a structure group. This is all for the northern side of the fire. #ElectraFire #FireWX pic.twitter.com/Ip59TCXqIu

And plenty of people are without power because of the fire, and many more may yet lose power. “PG&E says about 15,000 customers are still without power in parts of Amador and Calaveras counties as of Tuesday morning,” according to KOVR. “Crews preemptively de-energized several distribution lines at the request of Cal Fire.”

And, ominously, the station reports, “The utility company also says they have a number of assets possibly at-risk due to the Electra Fire.”

Cal Fire is still saying that the cause of the fire is “Under Investigation.” but many people will instinctively blame fireworks or PG&E from the blaze. We’ll probably know more later in the week. But the Electra Fire is currently trending in the wrong direction, and it’s likely going to be a difficult week for Amador and Calaveras Counties