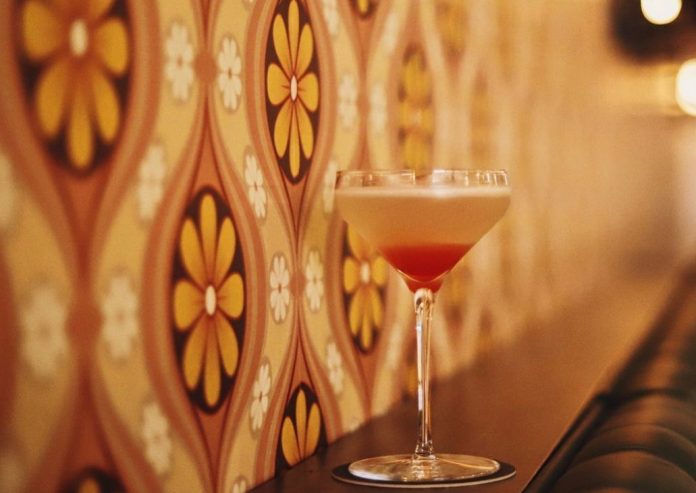 A couple of Future Bars alums, Barry John Walsh and Janice Bailon, are bringing some 1970s disco and funk flair to the Cow Hollow space that was formerly home to Michael Mina’s Test Kitchen (and more recently U:Dessert Story).

For the Record, Walsh’s new, 1970s-inspired bar project, opens tonight (Wednesday) at 2120 Greenwich Street. Eater has a photoset of the Maude-era interior, which is heavy on the orange, brown, and gold — the signature color palette of the mid-70s — along with some avocado leather seats at the bar.

All ten signature drinks on the menu take their names from songs from the era, and into the mid-80s, and Walsh promises that the soundtrack at For the Record will be limited to disco, funk, and soul only. And there are some disco balls hanging from the ceiling too.

The drink selection appears very colorful — with the California Soul featuring a splash of Campari in a mix of vodka, Lillet, and sparkling wine for a sunset look; and the purple-blue hues of the Superfly, made with mezcal, lemon, passion fruit, blue spirulina, and a touch of the oh-so-70s ingredient, Galliano.

Bailon, who previously bartended at Bourbon & Branch, has created the showy drink menu, which also includes the bright purple Superstition, made with housemade ube orgeat, aged rum, coconut, and coffee.

She’s also offering a selection of mini-cocktails she’s calling “Cheekies,” because they’re “just enough to fill your cheek,” as Eater reports. These include something called Bad Girls, which is a mix of mezcal and Brucato Amaro. Sounds like shot to me!

Consulting chef Frank Hua of the Hawaiian pop-up Unco Frank’s has created a concise food menu for For the Record, which includes deviled eggs, a Caesar salad, and coconut shrimp — all vaguely inspired by 1970s party food.

For the Record joins a handful of new cocktail spots that have debuted so far this year, including the opening of Lobby Bar in the Castro last week, and Bottle Club Pub in the Tenderloin near Union Square. The new rooftop patio bar, Kaiyo Rooftop, also opened near Oracle Park in SoMa in February.

For the Record opens at 5 p.m. and will be open Tuesday to Thursday from 5 to midnight; Friday and Saturday from 5 p.m. to 2 a.m.; and Sunday from 3 p.m. to midnight.