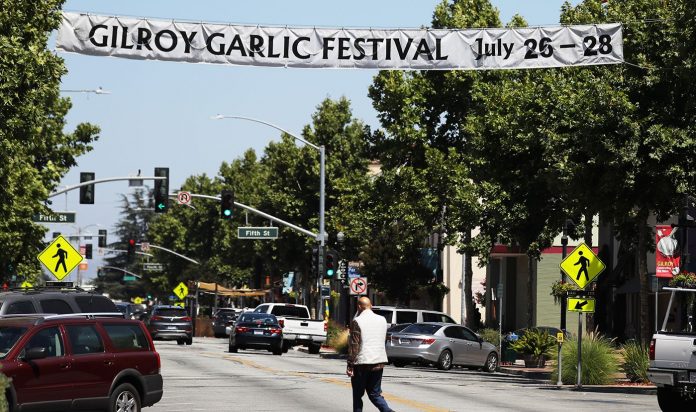 Gilroy Garlic Festival Is Kaput After 43 Years, and One Mass Shooting

The town of Gilroy is officially saying goodbye (for now?) to its internationally known, annual Garlic Festival, which was a major tourist draw over two summer weekends for four decades. And the reason isn’t wholly tied to the shooting that occurred there in 2019.

Citing “lingering uncertainties from the pandemic, along with prohibitive insurance requirements by the City of Gilroy,” organizers of the Gilroy Garlic Festival announced late Thursday that this year’s festival would not happen, and that the festival as everyone knows it is likely dunzo, forever.

“The events that people have been used to for these 42-43 years, that model is no longer going to be used for the festival,” said Tom Cline, a board member of the festival association, speaking to ABC 7. “It’s going to be a smaller, intimate model.”

That smaller model will include a farm-to-table dinner event, similar to one held in 2021, a golf tournament, and a concert series.

While the 2019 shooting, which occurred on the Sunday of the festival’s first weekend as festivities were winding down, would have likely put a damper on things regardless of the COVID pandemic — and one festival vendor tells ABC 7 she can’t even go near Christmas Hill Park, where the festival is usually held, due to the lingering trauma of the shooting — the reasons for canceling the festival seem largely financial.

Speaking to KSBW, Cline said, “Clearly it was over the 10 years of just losing money — [that] was the main culprit and the main cause of what was going on with the festival and being able to be sustainable and that was the … root cause of it.”

And as Gilroy Mayor Marie Blankley tells ABC 7, “well before 2019 even, [the organizers] were in a predicament that they were going to have to change and reimagine and figure something out because the money was already not there.”

As for the “prohibitive” insurance costs that now come with the event — presumably the price tag for that went up after a mass shooting — Blankley says, “When you don’t have money, everything’s prohibitive.”

Certainly having to cancel 2020’s festival and then hold a drive-through event in 2021 for vendors of garlicky foods did not help the financial picture either.

The festival had, in the pre-2019 period, outgrown Christmas Hill Park, and it sounds like development encroaching on the area next to it created parking challenges as well — and a need for festival-sponsored buses.

But fans of the event who made annual pilgrimages to the South Bay for their garlic fix can at least hear a modicum of hope in what Mayor Blankley and Cline had to say — some smaller festival might come together elsewhere, in future years.

“Everyone should stop and you know, not look at what has been lost. But instead look at just going back — maybe to the halfway point — and just building it again, under the circumstances of today… which are very different than when the festival started in the 1980s,” said Blankley.

The festival first launched as a smaller affair in 1979, and over the course of the 1980s and 90s gained international attention and grew in popularity — helping to solidify Gilroy’s reputation as the Garlic Capital of the World.

The 2019 shooting was committed by a disturbed 19-year-old who grew up nearby and whose true motives — beyond a fractured and rage-filled ideology that toyed with white supremacy — remain unknown. Three people died in the shooting, including two children, and 17 others were injured. The shooter took his own life after screaming about being “very angry,” though initial reports suggested that police on the scene had shot him.

Survivors of the shooting filed a lawsuit against the festival organizers in November 2019 citing “negligent security measures.”

Photo from 2019 by Mario Tama/Getty Images