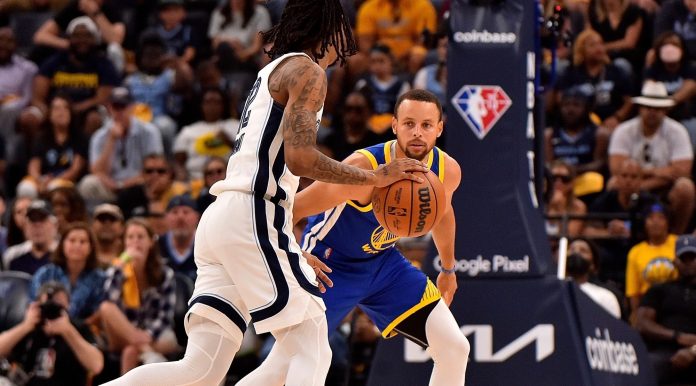 After a Close Contest, an Ejection and Missed Free Throws, Warriors Squeak Out Game 1 Win Over Memphis

Pardon, me, but I just realized that I haven’t exhaled since yesterday’s fourth-quarter buzzer in Memphis. Allow me to catch my breath…

(Whew!) Should we talk about the high scoring, high-rebounding of Jordan Poole, Ja Morant, Stephen Curry and Jaren Jackson Jr.? Should we talk about about the flagrant foul heard ’round the world? Should we obsess over Klay Thompson — who hit the game winner yesterday — missing a pair of free throws with seven seconds left that would have put the Dubs up by two or three points?

The Golden State Warriors hung on to a one-point lead and bested the Grizzlies 117-116 on Sunday to take a spectacular, hard-fought Game 1 of the West Division Semifinals. Both teams saw productivity from their stars and their benches. Both teams had very brief 10-ish-point leads that evaporated as quickly as they built, and the game felt more-or-less locked for the duration of yesterday’s 48 minutes.

Jordan Poole with his eyes on the prize yesterday while the Grizzlies’ De’Anthony Melton defends. (Photo by Justin Ford/Getty Images)

It felt like Jordan Poole was due for a big game. He had 8 and 11 points in the last two games against the Denver Nuggets, shooting an uncharacteristically low 30%. Poole missed maybe his first five shots on Sunday, but got to the free throw line in the second quarter, made both, then finally hit a three-pointer — the swish of the net cathartic for fans waiting for No. 3 to have a break-out game.

Not long after that shot, Draymond got a steal and fed it to Poole, who casually walked into another shot — a good eight feet away from the the three-point line — and nailed it. It was clear that JP had found his stroke.

Jordan Poole scored 31 points on Sunday, shooting 12-20 from the field and 5-10 on threes. He was also a force in the paint, and was dishing passes as if firing them from a cannon. Poole had 9 assists and 8 rebounds — putting him just shy of a triple double.

Grizzlies’ superstar Ja Morant had  similar numbers with 34 points. (Morant missed a triple double by one rebound.) The Warriors seemed content to let Morant fire from three, perhaps preferring that shot to Morant’s proven lethality driving to the basket.

Ja Morant, defended above by Gary Payton II, was 4-11 from three yesterday, which has already tied his three-point total from the six-game round-one series with Minnesota. (Photo by Justin Ford/Getty Images)

Late in the second quarter, with the Warriors down by a point, Draymond Green stripped the ball from Kyle Anderson, but couldn’t wrangle the loose ball; Anderson carried on to the cup, and would eventually dish to Brandon Clark.

Draymond got under the basket and blocked Clarke’s shot — and then we watched what had ensued in the paint no fewer than 30 times on replay, as the officials dissected the sequence for what felt like an eternity.

It looked like a car crash. Green had a fist full of Clarke’s jersey, and appeared to pull Clarke laterally — but Draymond kind of held Clarke as he fell to the floor. (It wasn’t until the gazillionth replay that announcers noticed there was contact to Clarke’s face.)

Here’s the actual call from the referees, in what sounds like a scene from Mortal Kombat: “Draymond Green has been ejected for the wind-up to the face, impact to the face, the follow-through to the jersey and the throw-down to the ground.”

Here’s a rough summary of what Draymond said about the fracas on an “Emergency Pod” of the Draymond Green Show last night: “Trying to explain this flagrant foul to you… your guess is as good as mine. By definition, if we go through the definition of a flagrant 2, I’m not sure it would meet that criteria. I actually tried to hold him up. Guys were telling me that I was ejected for throwing him down.

“It’s a reputation thing moreso than a hard foul.”

(Sports Illustrated called the “flagrant 2” ruling “questionable.” I personally don’t have the basketball knowledge to have an opinion either way, other than to say that the collision between Green and Clarke looked gnarly. [Clarke lingered on the floor after the scrap, but appeared to be just fine.] There is universal disagreement on every single foul called or not called in every single moment of every game, so controversy is bound to fester.)

At the time of his ejection, Draymond had 6 points, 4 rebounds, 3 assists, 3 steals and 1 block, and had established a presence on the floor that Warriors’ fans have come to expect. His sudden ousting from the game might have felt deflating, but if you’ve been watching the Warriors this season, you’re more than used to the Dubs being down key players and still getting it done.

Stephen Curry had 24 points yesterday with 5 made threes, 3 rebounds and 4 assists. (Photo by Justin Ford/Getty Images)

It was a splashy third quarter. The Warriors actually built a 10-point lead in the fourth, but Memphis pulled even, then ahead, and then the teams went back and forth, exchanging small leads.

Maybe the biggest story of Game 1 was the Warriors’ rebounding — the Dubs grabbed 51 boards to the Grizzlies’ 47. (The Grizzlies had led the NBA in rebounds per game in the regular season with 49.2 per game; the Warriors ranked seventh at 45.5.) Andrew Wiggins and Otto Porter Jr. each had 8 boards, Gary Payton and Jonathan Kuminga each had 6. Damion Lee got his first playing time in the post- season and nabbed a rebound.

Gary Payton II, who started yesterdays’ game, seemed to create havoc among the Grizzlies’ offense every moment he was on the floor. (Photo by Justin Ford/Getty Images)

It was after a flurry of second-chance shots, with just under 40 seconds left in the game, that put the Warriors up for good. Trailing 114-116, Klay Thompson caught an inbound pass, faked, and fired a three. Splash.

Back the other way, Ja Morant drove into the paint, but Steph Curry — who had five fouls — knocked the ball away, and the Warriors played keep-away as the clock ticked down to about 11 seconds. Klay Thompson caught an inbound pass and hung on for nearly five seconds before he was fouled. It seemed all but inevitable that the Warriors would at least give themselves a two- or three-point lead.

But Klay missed the first shot. And then, as God as my witness, the second. Gasp.

Everyone in the building knew that the ball would go to Ja Morant for the final four-second drive to the rim, but Klay and Gary Payton II played the D, forced Morant into a difficult left-handed-layup attempt, and the Warriors hung on.

If Draymond Green gets two more “flagrant 1s” or one “flagrant 2,” he will be suspended for one game. There is no word, yet, on whether yesterday’s ejection-spurring foul will be reviewed or rescinded by the league. (Photo by Justin Ford/Getty Images)

“It was such a beautiful thing to see Jordan Poole have a huge game, Steph Curry to come out in the second half and go lights out, and Klay Thompson, to be shooting miserably after sitting the entire first half, and then hit the big one — because that’s what Klay Thompson does,” said Draymond Green on his podcast last night. (After the game, Draymond met his victorious teammates in the tunnel as they exited the floor.)

“How do you beat Memphis four times?” Steph Curry wondered at yesterday’s post-game press conference. “The beauty of it is, whatever it requires to get out the series and win, like, we’re gonna figure that out and approach it that way and not get too ahead of ourselves — because I don’t know where our peak is.”