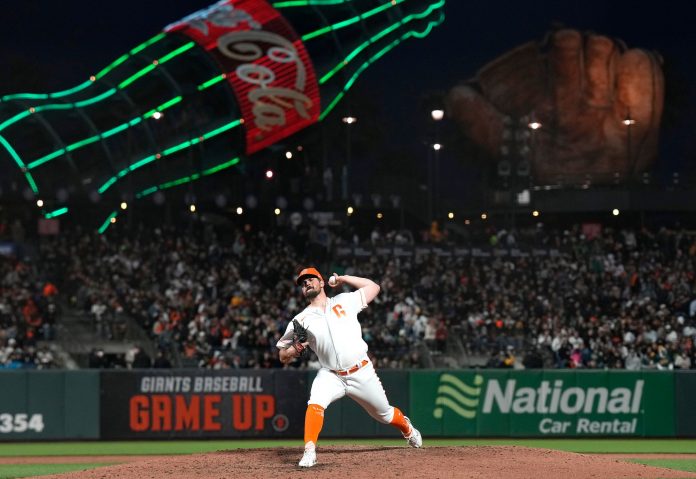 Are the San Francisco Giants What Baseball Needs?

With the once imperiled but salvaged-at-the-last-minute 2022 Major League Baseball season now a little more than 1/10th complete, the San Francisco Giants are sitting atop the NL West standings, a half a game ahead of the famously deep-pocketed LA Dodgers. Despite a slew of injuries, the Giants are playing very good baseball. At 13-6, they have one of the best records in the league, bettered only by — and this is actually true — the New York Mets.

Are the Giants, once again, going to defy all expectations? Do they have a shot (don’t jinx it!) of going all the way? Is their identity forever going to be the high-achieving underdogs, the masters of making mediocrity into greatness, who are forever battling it out with their Daddy-Warbucks rivals to the south?

It would be silly to try and make predictions at this point in the season, with something like, what, 5,000 games left to play? It would also be silly for this writer to make any kind of MLB prognostications — I only get interested in baseball when the days grow short and crisp and the pumpkin spiced lattes start to roll out.

Jakob Junis pitched a good game against the Oakland Athletics on Wednesday, but the Giants lost to the A’s 1-0. (Photo by Thearon W. Henderson/Getty Images)

Regardless of where the season ends, the Giants are, once again, a fun, competitive and always-entertaining team who constantly confound the experts. As their cross-bay cousins, the Oakland A’s, are being accused of intentionally throwing the season and copying the plot of the movie Major League, the Giants’ organization feel wholesome by contrast. (The Giants recently featured the first female to coach a Major League game.)

Where San Francisco fits into the larger context of the game of baseball, which is facing “declining cachet in America,” is an evolving question.

Here are a few high- and not-so-highlights from the first 11.72% of the Giants’ season, with the caveat that I have scoured the internet, rather than the reels or actual games, for this information:

On Monday in Milwaukee, Giants’ outfielder Joc Pederson stepped up to the plate in the top of the eighth inning, with San Francisco leading 1-0. In the stands, a Brewers’ fan was mercilessly heckling Pederson, according to the New York Post. The Giant’s outfielder stepped out of the batters box and stared at the heckler. “Then, Pederson stepped back into the box and promptly launched a 435-foot home run to deep center field.”

Joc Perderson rounds the bases on Monday after a two-run homer in the eighth, giving a cantankerous Brewers’ fan who had been heckling him a bit of poetic justice. (Photo by Stacy Revere/Getty Images)

As Pederson crossed home plate, he looked at the heckler, who we can presume had been silenced, or appropriately shamed, and yelled, “Do that again, f–king p—y.” A big-money acquisition from the Dodgers in the off-season, Pederson has been one the Giants’ “hottest hitters,” but had to leave Wednesday’s game against the Oakland A’s after three innings with what was described as right groin tightness.

“[I] just took a bad step and felt a little tightness in my groin — a weird step at a weird angle,” Pederson was quoted as saying by the Mercury News. Pederson will get an MRI to determine the degree of his injury.

Logan Webb has taken over as the Giants’ go-to arm for the 2022 season. Above: Webb serves up a pitch on Sunday against the Washington Nationals. (Photo by G Fiume/Getty Images)

The Giants have one of the best pitching rotations in baseball, according to Sportsnaut, with the lineup of Logan Webb, Carlos Rodón, Anthony DeSclafani, Alex Wood, Alex Cobb, Matthew Boyd and Jakob Junis. “There isn’t a marquee name among the San Francisco’s Giants start[er]s,” Sportsnaut wrote. “Logan Webb is generating some fanfare locally, but the 6-foot-1 righty is an unheralded ace. He’s going to eat a lot of innings in 2022.”

Alex Wood winds up against the Cleveland Guardians on April 17. (Photo by Ron Schwane/Getty Images)

Starting pitchers Cobb and DeSclafani were put on the injured list last week, though Cobb may be returning soon.

Wood has “gotten off to one of the best starts of his career,” with a 2.51 ERA through three starts, according to NBC Sports. “I feel like I’m throwing the ball maybe as good as I have in my career,” Wood was quoted as saying. “I feel really good. I’ll just try to keep it rolling.”

Here’s a Giant’s highlight that no one expected: On a list of athletes whose name is recognized by Americans over the age of 5, the first Major League Baseball player sits at number 54, according to Time Magazine. But “30% of Americans know Giants’ third baseman Evan Longoria, a former All-Star years past his prime.

“‘He may be getting a halo effect from the actress Eva Longoria,’ says Henry Schafer, executive vice president of the Q Scores Company, the firm that conducts this market research. He’s not totally joking.”

Longoria is roughly five weeks recovered from finger surgery, and could begin rehab soon, according to SBNation.

Evan Longoria watches his solo homer go the distance against the Dodgers in the 2021 postseason. (Photo by Ronald Martinez/Getty Images)

Last week’s Time article, titled Shohei Ohtani Is What Baseball Needs, argued that the sport must have superstars like the LA Angels’ pitching and hitting phenom to reclaim its place in the hearts of Americans. (Time said that when Ohtani came up to pinch-hit in San Francisco last May, Giants’ fans booed when he was walked.”)

“The so-called national pastime struggles with its declining cachet in America. The game has grown too slow and a bit stale, with a preponderance of home runs and strikeouts robbing its incremental drama. The length of an average nine-inning game is up 31% since 1975, largely because managers change pitchers nearly twice as often.” Time argued that “tyranny of analytics” have sucked some of the joy out of the game.

In addition to superstars like Shohei Ohtani, maybe baseball needs exactly what the Giants have brought the last 10-plus years: an unpredictability, a success on the field that no one saw coming. When the Giants won the World Series in 2010, a life-long fan told me, “That came out of nowhere. Who could have predicted that we’d win the World Series?” After a 29-31 start last year, did  anyone expect the Giants to go on to 107-win season? (Did anyone predict that they’d lose to the Dodgers in the playoffs — besides Dodgers’ fans?)

If analytics and sluggish games are bad for baseball, than surely the anecdote is surprise. That’s what makes sports exciting to watch: the unscripted drama.

In its 10 bold predictions for the Giants’ 2022 season, the Mercury News’ final projection was: “Somebody you’ve never heard of will do something heroic.” This again speaks to the Giants’ mastery of morphing mediocrity into magnificence. “The Giants have developed a reputation for plucking previously unheard-of players from the bargain bin and turning them into productive major leaguers.”

So who might that next hero be? “How about one of Alex Blandino, Jason Krizan or Luis Gonzalez, three players who earned raves from [Giants’ manager Gabe] Kapler for their strong performances as non-roster invitees.”

This one was for you, DewDrop.