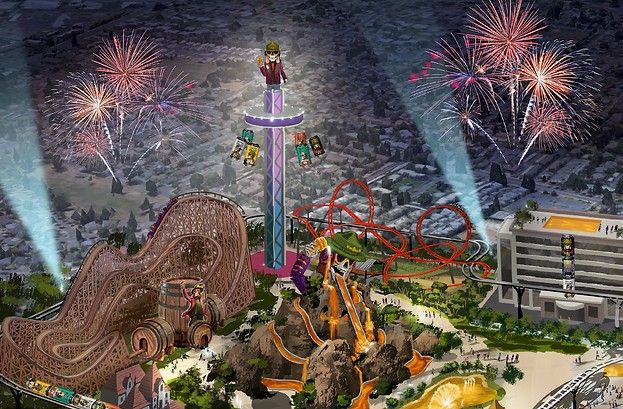 A bizarre alcohol-themed amusement park proposal called Voodoo Ranger IPA Action Park claims it’s “Coming Soon to Napa,” and residents are already organizing against it, though the whole thing may just be a sudsy publicity stunt.

But the “renderings” for this proposal look like a badly drawn adolescent Kid Rock fantasy. Consider the insane physics problems posed by the Voodoo Ranger IPA Action Park rendering above. If the roller coaster were, in fact, “NorCal’s tallest coaster,” it would be taller than the current reigning 3,937-foot-tall Medusa at Six Flags Discovery Kingdom in Sacramento. Yet the coaster itself is dwarfed by some sort of “space needle” ride next to it, which is depicted as nearly twice as large, and does not appear structurally sound.

Construction surveying begins Friday. Thanks to our fans, support for the Voodoo Ranger IPA Action Park is growing and we’re moving forward with our plans! pic.twitter.com/cmOZ7596CN

The beer brand claimed in a tweet just this morning that “Construction surveying begins Friday.” But SFist reached out to the proprietors New Belgium Brewing Company, and we’ve received no response. Same goes for the Chronicle and the Napa Valley Register, who have also looked into this. A call to a phone number listed on the website merely brings a pre-recorded message from some dude talking in monster truck show commercial voice, saying, “We want to hear from you!” and saying you can “participate in market research or get early updates and access.”

New Belgium Brewing Company is based in Fort Collins, Colorado, though does have a Mission Bay taproom in SF that opened last year. Their best known brand is probably their Fat Tire Amber Ale (The Voodoo Ranger IPA featured here is another of their beers). They bought up local brewery Magnolia Brewing out of that beermaker’s bankruptcy in 2017, and they were behind that old Tour de Fat costumed bike parade that used to happen here a few years back, an event they apparently still have in Fort Collins and Asheville, North Carolina.

New Belgium was acquired by the company that owns Japan’s Kirin in 2019, and they do an estimated $300 million in sales every year. So yes, they do have a few dollars. And that’s what worries Napa residents.

A 53-foot trailer truck emblazoned with Voodoo Ranger IPA Action Park branding has been seen parked at an Elks Lodge parking lot on Soscol Avenue in Napa, taunting the locals who absolutely hate the whole idea. Those locals have started a Facebook group to oppose the theme park.

“Think about the traffic, noise, and the environmental impact,” fumes one Napa native in the Facebook group. “Think about the drain on our resources. Think about how much the town will change if they create their ‘Spring Break’ destination.”

Opponents have also printed up “Stop the Beer Park” lawn signs, and have purchased the website Not in Napa to gather petition signatures and organize against it. One frankly has to wonder whether the opponents of the project have now invested more money against the beer park than New Belgium Brewing itself has spent to get the alleged thing built.

Plans for the Voodoo Ranger IPA Action Park, whose website promises it’s “coming soon to Napa,” are not real, as far as county officials can tell. https://t.co/d6erakinHJ

Because the Chronicle investigated the beer park plans, only to find that no plans whatsoever have been submitted to the city of Napa nor the county of Napa. “We believe it’s a publicity stunt,” Napa County planning commissioner David Morrison told the Chronicle. “There has been no application filed with the County.”

The Chron also notes that “Nor is there a record of New Belgium holding a liquor license in Napa,” and such a license would be a prerequisite for serving any beer at the beer-themed amusement park.

The Napa Valley Register also looked into this beer park proposal, and reports that the brewing company “hasn’t submitted an application or pre-application or contacted the county about developing an amusement park.” But the Register also admits to having run “several” advertisements for the beer park in their paper, a cropped version which can be seen above. (You can view the full ad here.)

The Napa Valley Register knows Napa County zoning as well as any publication out there, and they detail what a Hail Mary longshot the proposed park would be. “Several steps would be needed to build an amusement park on agricultural land in Napa County,” the paper explains. “They include changing the general plan and zoning designations and winning a Measure P vote of the people.”

The buzzkills of Whine Country want to stop our IPA Action Park. Help us make it happen. Like and share to save the park. pic.twitter.com/RGSx1omfBG

Yet rather than appealing to Napa voters, New Belgium Brewing Company is instead insulting and mocking them in wannabe-viral videos like the one seen above. “The buzzkills of Whine Country want to stop our IPA Action Park,” the beer brand says, along with a video of a supposed focus group that depicts Napa residents as cranky fussbudgets saying “No way in hell,” and “Stay out of Napa.” The video ends with a request (narrated again in monster truck voice)  that “We need your support!” to “save the park!”

In all likelihood, there is no park, nor even a tangible effort to build one. The whole thing looks like an online prank — perhaps to build some bad-boy marketing persona for one of New Belgium’s lesser-known offerings, and/or to concoct a beer drinkers-versus-wine drinkers battle, in an effort to court Millennials who are drinking less and less beer these days. And we’ve seen some viral beer promotion stunts that have provided a good chuckle, but this one seems to lack a punchline, or any attempt at plausibility.

The Chronicle also adds that “there has been no identified source for where the water would be coming from for an amusement park in the midst of a very serious drought.” Though I guess from the rendering above, we’re supposed to assume that the wave pool is not full of water, but “130,000 gallons of tasty Hazy IPA!”

Related: People Are Lining Up for Pliny the Younger Again, For Whatever Reason [SFist]