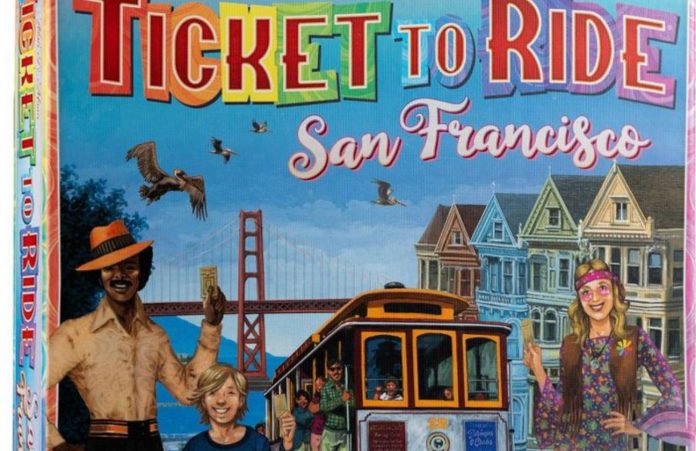 Fans of the board game Ticket to Ride who are also residents of/fans of San Francisco will likely be excited by the new SF edition, which comes complete with cable-car and ferry routes.

Ticket to Ride, if you don’t know, is an easy-to-learn strategy game based on building out train routes. The original version, based on a map of the United States and southern Canada and some traditional old-timey train routes, came out in 2004. Creator Alan Moon and the French-owned game company Days of Wonder continue to put out special editions based on specific maps — there’s a Europe edition, an Asia edition, a Heart of Africa edition; country-specific editions for India, Germany, Switzerland, and Japan; and most recently a city edition devoted to Amsterdam.

The San Francisco edition, as the Chronicle’s Datebook explains, came out in June and is being sold exclusively by Target until August, at which point it will be more widely available.

The cover of the board game, unfortunately, features a cliche’d flower-child hippie, a skateboarding child, and a Black man in 70s attire and a fedora, for some reason. Also, there are the Painted Ladies, a cable car, and the Golden Gate Bridge.

The game board features scoring numbers around the perimeter styled like old printed Muni passes, so that’s nice. And there are cable-car/train routes that will be unfamiliar to anyone who lives here, because this is just how the game works — players collect route cards that they must complete, and they’re not abiding by the Muni map, and BART isn’t really included. The different “train” colors in this case do indicate different modes of transport, including Muni buses, streetcars, cable cars, ferries, and VW buses.

“When we create a new version, we start by thinking, ‘What could be different?’” says Adrien Martinot of Days of Wonder, speaking to the Chronicle. “Maybe there’s a country we haven’t been to, or maybe we haven’t done a map with a certain kind of configuration before.”

The Target website says that the game is not available at the SF store at Folsom and 13th, but as of this writing there were two copies available at the smaller Target at Mission and Fourth. Otherwise you can have it shipped from another location, or wait until it shows up at your local game store in August.