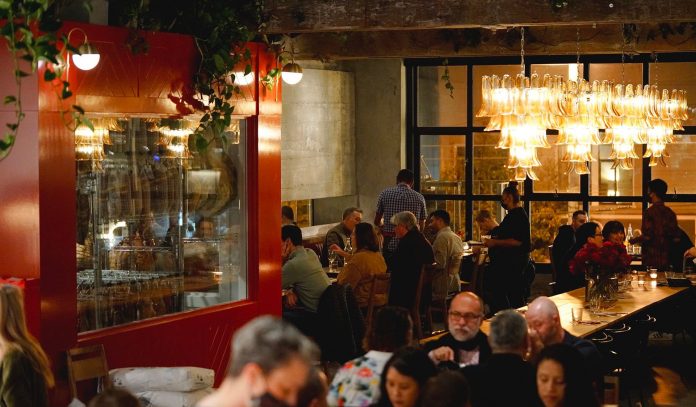 There was much talk in the restaurant industry throughout the pandemic about how the restaurant business was broken, how kitchen staff in particular have historically been mistreated and underpaid, and how things would need to change if restaurants wanted to staff up again.

We know from various anecdotes and statistics that the service industry was hit hard by the Great Resignation. And when a whole swath of people who had been making their money waiting tables or working grueling hours in busy restaurant kitchens were suddenly out of work at the beginning of the pandemic, collecting unemployment, they had time to rethink their paths and commiserate over the world they’d just left behind.

That has meant that as once uber-popular SF restaurants have tried to reopen or staff back up to meet the return of full-scale customer demand for indoor dining, they’ve had some trouble. The restaurants have often had to turn to less experienced front- and back-of-house workers, or they’ve had to alter the way workers are treated and compensated, to make the jobs more desirable and sustainable.

Last week the Chronicle dipped in to the story of Good Good Culture Club, the rebranding of Liholiho Yacht Club in its 18th Street location — formerly the home of the short-lived Dear Inga, and before that, Farina. (Liholiho itself is still supposed to return in its Lower Nob Hill digs at some point not yet announced.) For Good Good Culture Club, the restaurant owners decided to do multiple things to create a more hospitable workplace, starting with more equitable distribution of tips with back-of-house staff — something that had already begun at some restaurants pre-pandemic. The gratuity in this case is a flat 20% service charge that is shared among both front- and back-of-house staff via higher wages — kitchen workers are making between $28 and $30 per hour, which is fairly unheard of especially for prep cooks, and waitstaff are making $35 per hour because they work shorter shifts.

The entire staff is also working shorter hours, as the Chronicle notes. When Good Good Culture Club announced its opening in December, they said that open hours would be just 5 p.m. to 9 p.m. Tuesday to Saturday, and they’ve stuck to that, with the last tables finishing meals around 10 p.m. And unlike most restaurants, front-of-house staff is asked to participate in cleanup tasks like taking out the trash, creating more equity and less division among employees.

The 20% service fee, while now a fairly common feature at restaurants, is subject to pushback, the Chronicle notes — especially for people just perched at the bar for a drink. All checks, no matter what, get the 20% tacked on.

Former Chronicle critic Michael Bauer frequently complained about these fees, which proliferated after San Francisco mandated healthcare for all restaurant workers, saying that restaurants needed to stop calling out the high costs of doing business here on customers checks and just raise the price of dishes instead. But while some restaurants may have done both, restaurants like Good Good Culture Club, which appeal to younger diners, have stuck with the service fees — apparently thinking that too much sticker shock with dish prices will just turn people off.

Across town at Che Fico, which opened on Divisadero to immediate acclaim and crowds in 2018, the pandemic kept chef-partner David Nayfeld very busy — he launched a to-go meal program almost immediately, providing free meals to people in need as well, and the downstairs Che Fico Alimentari did a brisk takeout and delivery business. As the restaurant returned to full service in recent months, Nayfeld tells the Chronicle that he and his team have reimagined the business model as well — and he concedes that despite all that buzz and demand at the outset, the restaurant wasn’t making money at the beginning.

In order to pay better wages to kitchen staff — they’re earning $60K to $72K at Che Fico now — the restaurant has raised prices across the menu 15% to 20%, with pizzas now going for $30. And on top of that, the restaurant is charging a 10% “dining in charge” on top of gratuity, which staff say has not discouraged most customers from still tipping generously, per the Chronicle. (The surcharge can be removed if someone complains, and staff says that it is meant to spark a conversation about the “true cost” of running a restaurant.)

“You cannot have culture without compensation,” the paper quotes Nayfeld as saying.

In both the cases of Good Good Culture Club and Che Fico, the new models somewhat disfavor experienced waitstaff who are used to both ruling the roost and taking home the most generous compensation. Being the salesforce and the faces of the restaurant, some would argue that they deserve that higher pay — not to mention having to interact with customers both easy and unpleasant, and keep a smile on one’s face.

The Chronicle notes that, at Good Good Culture Club, “One career server left after two or three nights of taking out the trash,” and others have balked at the payscale, saying they could make double or triple the money elsewhere, where the old business model is still in place.

Last year, Zuni Cafe — where servers often cleared over $100K per year in the olden times — reopened with a service-fee model in which servers were offered flat hourly pay, and many of those veteran servers balked. It’s not clear how many of them ended up returning and taking the new wage, but Eater reported that at least a couple did, after negotiating a higher hourly than the $24/hour that the restaurant was initially offering.

And, at least at Good Good Culture Club, the model appears to be profitable so far. As the Chronicle reports, the restaurant management set a goal of $320,000 in gross sales and it’s exceeded that in three of the last several months, and made a tidy profit.

Whether these models keep succeeding or whether they influence the broader industry as a whole remains to be seen. Hiring experienced front-of-house staff appears to be an ongoing challenge at many restaurants — and no one wants to pay a mandated 20+ percent on top of their bill for lackluster service. (On Che Fico’s Yelp page currently, four of the six most recent reviews complain about the price of their bills, with one specifically calling out the extra 10% surcharge.)

One server at Che Fico, Kyle Quinn, says he’s especially grateful for the healthcare that afforded him some mental health attention and rehab when he needed it most in January 2021. And while he fully supports the new business model that afforded him that, he tells the Chronicle, “It sucks because our restaurant is really expensive: $30 pizza, $38 pasta, $19 glasses of wine. It would be really hard for me to eat there without a discount.” Quinn adds, “But at the same time, this is a movement that I can get behind and that I want to be a part of.”

What’s clear is that even your favorite restaurants are likely to have to adapt in some way to the changing economic landscape, the cost of food, and the demands of young staffs entering the workplace in search of better treatment and compensation. Beloved Castro restaurant Frances just reopened last month with a single, family-style prix-fixe priced at $86 per person, no substitutions — though a la carte add-ons are available. A 20% gratuity is added — as well as a 2% service fee — on every pre-paid check, and Frances is using the pre-paid, ticketed model now as well.

Chef-owner Melissa Perello says that “factors like staffing and supply chain issues were unavoidable considerations” in the change of format, but ultimately it was “rooted in wanting to offer the best possible dining experience with the resources at our fingertips while maintaining as much of the original Frances character as possible.”

Still, the restaurant is very much like it was, with just fewer choices to be made — and for some diners, that’s not a problem.

We should all probably just be grateful that San Francisco still has a relatively vibrant restaurant scene that has, for the most part, come back to life.

Hudson Riehle, senior vice president research at the National Restaurant Association, said last year that the pandemic had essentially wiped away six years of sales growth across the industry.

“2020 was certainly the worst year for the restaurant industry in its history,” Riehle told CNBC, “Recovery for the industry will definitely take time.”