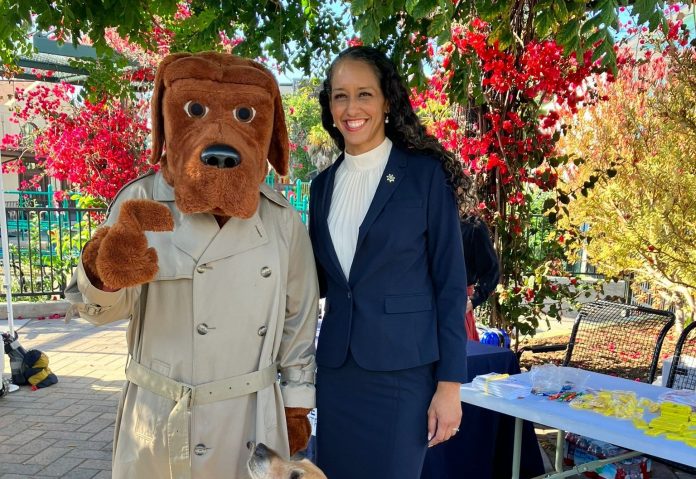 During newly appointed SF District Attorney Brooke Jenkins’ first month in office, there have not been any announced policy changes to differentiate her from her recalled predecessor Chesa Boudin. There was, of course, the obligatory staff shake-up, and a large number of symbolic photo-ops, but no real brass-tacks changes to signify how her office would prosecute any differently than Boudin.

DA Jenkins announced she's revoking over 30 plea offers to drug defendants that she has deemed too lenient.

But that changed in a big way on Wednesday, in Jenkins’s much-promoted press conference where the Chronicle reports she vowed to crack down on fentanyl dealers. The Chronicle reports she will be rescinding over 30 plea offers that were negotiated under Boudin, and she “laid out a slate of new policies intended to clamp down on a drug epidemic that has decimated the city’s Tenderloin neighborhood.”

“On my watch, the D.A.’s office is going to take these cases seriously,” Jenkins told the Chronicle in an interview. “We are dealing with a public health crisis with regards to fentanyl, and no longer are we going to be giving a free pass to people who sell (that) drug in San Francisco.”

For the past year +, the previous administration did not earn one conviction for fentanyl.

We have to send a strong message that you will face consequences and potentially jail time for dealing fentanyl. https://t.co/Q8k2QnaQrP

A press release sent by Jenkins’ office does repeat a rather spurious (though politically effective) claim: “According to San Francisco Superior Court data obtained and first reported by The San Francisco Standard, the previous administration did not obtain a single conviction for dealing fentanyl in all of 2021.”

This is a massively misleading characterization. As that very SF Standard article explains (albeit much further into the piece), “Boudin’s office is still obtaining convictions in fentanyl drug sales cases, but the actual convictions are not for the crime of drug dealing. About 80% of the cases in a type of charge category that included fentanyl dealing — 44 in total — involved a defendant ultimately pleading guilty to a crime called ‘accessory after the fact,’ meaning the accused was convicted of helping another person commit a crime.”

This was essentially done to protect immigrant suspects from deportation.

KTVU reports on Jenkins’ other announced drug policy changes, noting that show would be “not referring anyone arrested with more than five grams of illicit substances to the city’s drug court,” and “adding charging enhancements for drug dealing within 1,000 feet of a school and prosecutors will now potentially seek pre-trial detention of fentanyl dealers in extreme cases.”

This will all be sold as the Jenkins administration getting tougher on drug dealers with harsher sentences. But remember, district attorneys don’t hand out sentences. Judges do.

Jenkins’ new policies have not been tested in the courts, and neither has her prosecutorial acumen. So there’s no win-loss record yet here. And in the court of public opinion, the win-loss record will be determined by whether we see any changes on the streets of the Tenderloin, and San Francisco at large.