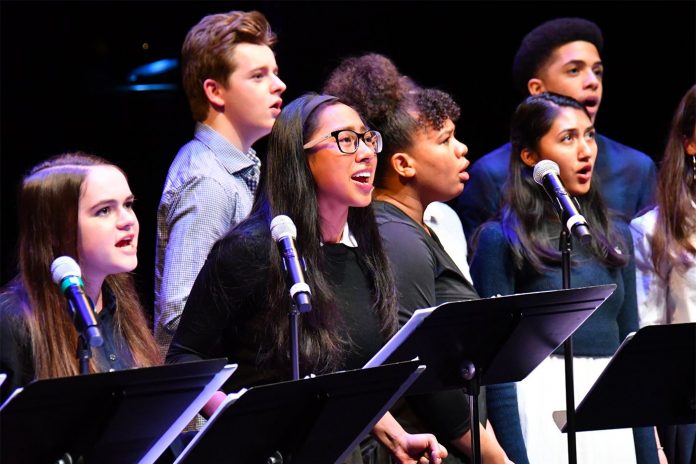 The Code is an unusual piece of work that benefited from a long incubation due to the pandemic, and American Conservatory Theater’s Young Conservatory is getting set to premiere the musical in two weeks.

The musical, with book and music by The Kilbanes — the performing duo Kate Kilbane and Dan Moses — is based on interviews that Kilbane and Moses did with real life teens several years back. First set to premiere in 2020, The Code is a pop-rock musical set at the fictional Valhalla Academy, and it’s performed almost entirely by ACT Young Conservatory members, aged 14 to 21.

“It’s really nice to have a show kind of catered to this generation,” says 19-year-old performer Janelle Soriano, speaking to KPIX. “Having our voices heard, having actual actors in this age range play these types of roles, it’s been really nice to be seen and recognized in this way.”

Soriano has been working on the show for over three years, since she was a sophomore in high school, and she’s now heading into her sophomore year of college.

“I am so thrilled to see this project come to life,” says Young Conservatory Director Jill MacLean in a statement. “With the Kilbanes’ incredible score, and a book written specifically from the perspective of current day high schoolers, The Code is a special show that will appeal to audiences of all ages.”

When seven students at Valhalla Academy unearth a secret message in the library, they discover their uptight prep school used to be a sanctuary for trailblazing young women . . . until someone burned down the school. Piecing together letters, journals, and yearbooks, the students must find the real stories about the school’s origin, and the true cause of the fire. As we switch between following the boldly curious students of 1919 and their 2020 counterparts, The Code asks: What does it mean to be a good student? Who has the right to an education? And what if we reimagined what school could be?

Director Jessica Holt tells KPIX that the pandemic delay was a blessing, because it allowed the cast and artistic team to develop “a very large, and inspired, and sprawling piece of work.”

ACT’s Young Conservatory has been in existence for decades, providing professional training to young performers ages 8 to 19. Winona Ryder is one famous attendee of the program, which also counts among its graduates Darren Criss, and Broadway performers Adam Jacobs (Aladdin) and Erika Henningsen (Mean Girls).

The Code runs for just four days next month, at ACT’s Strand Theater — with five total performances, including two matinees, from August 4 to 7. Find tickets here.