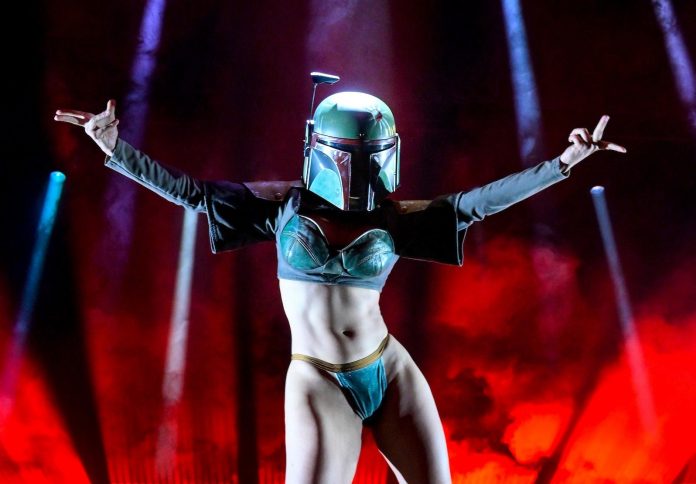 You’ll laugh it up, fuzzball, at The Empire Strips Back, a Star Wars burlesque parody stage show that uses the force of elaborate costumes, props, and puppets that are out of this world.

If you’ve ever done any social media clicking on Star Wars-franchise or burlesque performance content, you have likely been served many a Facebook ad lately regarding a performance called The Empire Strips Back. This is indeed a real show; it opened in preview performances in early July, and this striptease show catering very specifically to Star Wars fans with encyclopedic knowledge of the franchise had its opening Thursday night at the Chinatown’s Great Star Theater, and continues its (Kessel) run through August 28.

But The Empire Strips Back is not a local show. It started a long time ago in a galaxy far, far away, specifically in Australia in 2011, and toured that country a few times. It had a brief 2018 engagement at The Warfield and has played a few other U.S. venues. Your emcee for this engagement is Oakland standup comic Eric Newton, who does crack one BART joke while never breaking his semi-canonical character, but otherwise, this touring revue could be plugged in to any city’s theater, which is what it seems designed to do.

Even a stormtrooper can’t miss when doing a Star Wars-themed show in the Bay Area, where the cult fandom runs strong. But still, the hardest-core Comic Con cosplayers out there will find the elaborate prop work, costumes. and puppetry to be most impressive. (In particular, a fully operational R2-D2 unit is capable of some genuinely stellar disco lighting effects.) Thursday’s show clocked it nearly two-and-half hours, pretty much the length of a Star Wars movie, but its asteroid field of slapstick gags never dragged or slowed.

The show is highly heterosexual, proudly lowbrow, and primarily female-centric cheesecake numbers. But this does not stop standout male dancer Jin Kim from pretty much stealing the show, and it helps that he does not have as much headgear slapped on him as his counterparts in Boba Fett and Darth Vader helmets.

Of course, San Francisco has a burlesque scene that’s light years ahead of most cities, and burlesque devotees will hardly be blown away by the choreography. There is no try on any traditional tricks like chair dancing or fan dancing, nor any aerialist stunts or tassel-twirl tricks.

Though there is one standout set, which may or may not be referenced in the above photo, that employs certain costumes in a Chorus Line-Rockettes context that achieves a memorable effect. Otherwise, this show is Star Wars camp set to contemporary pop hits, whose humor is fueled by a non-stop parade of minor-character cameos, with very crowd-pleasing results.

The Empire Strips Back never reaches for an artistic high-water mark, but what will surely stick with you are its elaborately crafted props, puppets, and costumes, plus a light show that absolutely dazzles. This is a traveling show, but does not have the carpetbagger feel of those Netflix-show “immersive experiences,” because it fits well with the culture and feel of the newly incarnated local favorite Great Star Theater. And despite all the droids and wookies onstage, the human element is still strong with this one.

The Empire Strips Back runs though August 28 at the Great Star Theater, 636 Jackson Street. Tickets here