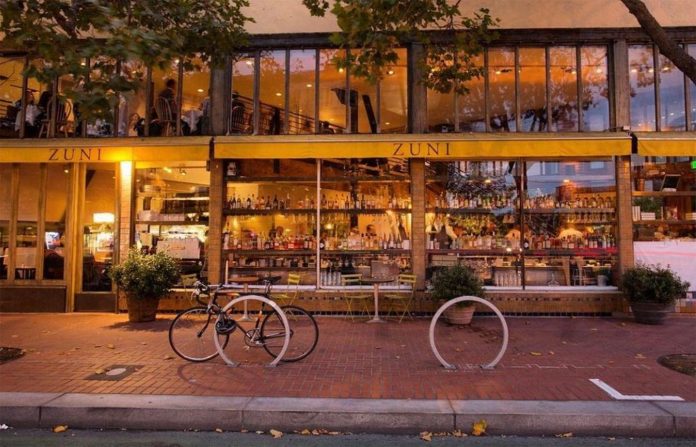 The switch to a no-tip, 25%-surcharge model at world-famous Zuni Cafe has done wonders for the wages of kitchen staff. But very few of the veteran servers remain who worked at the restaurant when the tips were taken away, and those who work there now are still complaining.

Switching away from tipping has been a tough road for some restaurants around the country, as restaurateurs try to address decades of pay inequities between front- and back-of-house workers. As we discussed the other week, flat-service-charge models have been adopted at two other high-profile SF restaurants in the last year, Che Fico and Good Good Culture Club, and it’s meant that servers are making flat hourly wages that don’t compare to the kind of money some of them are accustomed to making in places that have a standard tipping format. (Che Fico charges a flat 10% surcharge, but tips are still expected on top of that, while Good Good Culture Club charges a flat 20% on all checks.)

The model also means that hourly wages for traditionally un-tipped workers, like prep cooks and sous chefs, have become much higher than before, enabling some to stop working extra jobs to make ends meet.

But as the Chronicle reports, one of the first big restaurants to adopt such a model, Zuni Cafe — which switched away from tipping in mid-2021 as it returned to indoor dining, is still dealing with pushback from waitstaff. Also, we learn that of the 23 servers that Zuni has on staff, only three are from the old guard — the rest all sought more profitable pastures elsewhere. Other restaurants, including Bar Agricole, tried switching to such a model in earlier years but ultimately switched back due to server revolts.

Being the front-of-house, faces of the restaurant, and those responsible for keeping customers happy and selling dishes, wine, and drinks, some servers will argue that they simply deserve to make more than the people making the food.

One current staffer at Zuni, Richard Wade, who is one of the few who stayed on from before explained the problem with the model to the Chronicle thusly, in reference to the increased numbers of customers he served over Pride Weekend in June: “Normally working that kind of a crowd, you’d be making a lot of money,” Wade says. “In this tipping system I just made the exact same amount as if I had sold $800 rather than $3,000.”

Customers are able to pay extra on top of the 25% “fair wage charge,” as Zuni calls it, and that cash goes directly to servers who can choose whether or not to share it with bussers or bartenders — but if an extra tip is made via credit card, it goes into the same pay pool for the hourly wages.

Another server tells the Chronicle that this is like if a car salesman only got to keep a third of their own commission, and had to share the rest with the manufacturer or dealership. That server, Kate Sachen, suggests that it isn’t fair that servers are being forced to bear the brunt of this economic realignment in the restaurant business — especially when customer-facing work can be taxing in its own way.

There probably isn’t a good answer for these troubles, with restaurants still facing staffing challenges in the kitchen. And Zuni owner Gilbert Pilgram tells the Chronicle that he’s not in any way considering bringing tips back. That option is “off the table,” he says, but he concedes that if his staff remains unhappy, something about the model will likely have to change.

With 20 out of 23 servers at the restaurant all being fairly new to the place, that has to come with training and quality-of-service costs as well…

Related: Two Buzzy SF Restaurants Are Trying Out New Models For Compensating Workers — And Checks Are Going Up In Price