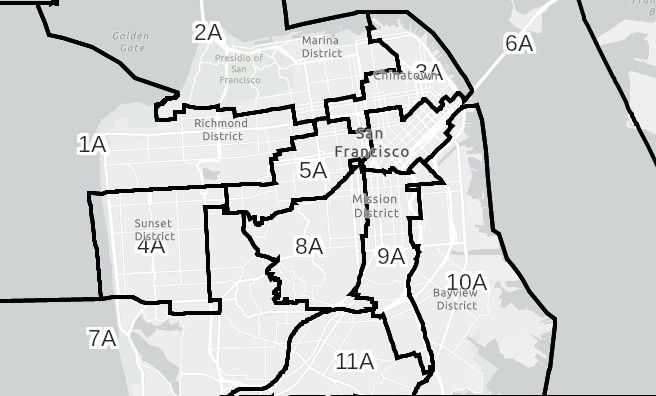 New Proposed Board of Supervisors District Map Is Out, and Everyone Thinks It’s an Abomination

The proposed redistricting of the SF Board of Supervisors map has been released, and early reviews from current and former supervisors describe it as ‘horrifying,’ ‘a joke,’ and ‘on crack.’

San Francisco is redistricting its Board of Supervisors districts, as we do every ten years based on the latest Census data. The latest iteration of this new map-drawing process has been underway since last April, and on Thursday, we hit something of a milestone with the release of a proposed new map. But as the Chronicle reports, several current supervisors are lambasting the proposed map with assessments like “very disappointing,” “this had to have been a joke,” and “Whoever came up with that map looks like they’re on crack.”

Notably, District 8 Supervisor Rafael Mandelman would no longer live in his own district, and in the words of the Chronicle, “would have to move if he wanted to continue running for re-election this year — or lose his seat.”

Above we see the proposed new map, which is also available online. (You can see side-by-side versions comparisons of the current and proposed new maps via the Chronicle.) Your major changes are that District 6 loses Mission Bay, District 5 loses Japantown, and District 8 loses Duboce Triangle, parts of Corona Heights, and part of the Valencia corridor. A sort of Cliff Notes version can be seen below, with the changes marked in red.

The most contentious response has been to the carving up of District 8, which State Senator Scott Wiener took to Twitter to call “horrifying.”

🧵The first draft of the Board of Supervisors redistricting map is out.

It’s an early draft, but it completely screws over the LGBTQ community by chopping in half the precincts with the heaviest LGBTQ population — both “progressive” & “moderate” precincts.

In a statement to SFist, a spokesperson for Wiener’s office says the proposed new map “removes the entire northern part of the district — part of Castro, Corona Heights, Corbett Heights, Buena Vista, Duboce Triangle — some of the most LGBTQ heavy precincts in the entire city. And it removes a big chunk of the Valencia corridor, LGBTQ heavy and progressive.”

Mandelman himself tells the Chronicle, “This particular map basically slices the Castro and the queer community in half,” and that “I almost feel like this had to have been a joke or not a serious effort.”

But is the “queer community” best served by having only gay, white CIS males hold the seat? Since 2001, the seat has been held by Mark Leno, Bevan Dufty, Scott Wiener, Jeff Sheehy, and Mandelman. That is LGBTQ representation, though I’m not sure if it’s “diversity.” (In the at-large days of 1981-2000, two prior supervisors had been out lesbians Susan Leal and Roberta Achtenberg.)

The moving of Japantown out of District 5 and into District 3 (Chinatown’s District) is also drawing backlash. “Whoever came up with that map looks like they’re on crack,” District 3 Supervisor Aaron Peskin told the Chronicle. “It looks like gerrymandering to me. It seems like they’re cutting up communities of interest. It struck me as laughable, and I doubt that anybody in either district is gonna support it.”

San Francisco finally has a first draft map of the city's new supervisor districts — & it's time to raise your voice! 🗣The @RedistrictSF Task Force will discuss this draft on Monday, March 14, & you can tell them what you think. Learn more 👇🏾https://t.co/ZhbnvfRNg9… #FairMapsSF pic.twitter.com/ACNG5OxVaE

The new map is just a first draft, though, these draft maps always change. And you can have input! The Redistricting Task Force meets again this Monday, March 14, at 5:30 p.m. at City Hall in Room 244 (meetings are in-person again). The final map will be determined by April 15.

Related: SF Is Getting Its Supervisor Districts Redrawn Next Year [SFist]