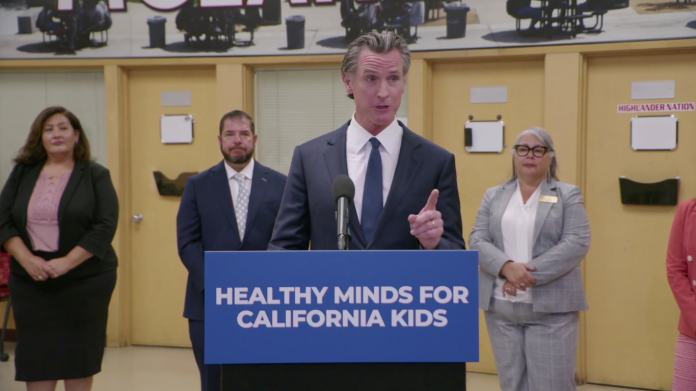 With a statewide youth suicide rate that’s spiked by 20% during the pandemic, Newsom a announced a new plan Thursday to double the number of school counselors in the state, and add 40,000 more behavioral health professionals.

California Governor Gavin Newsom is in the enviable position of being able to throw around surplus money like a drunken sailor. But in terms of mental health initiatives, he skews a little more sober like a judge, and a mean judge at that. His “Care Court” proposal from earlier this year struck many as a sort of criminalizing mental illness.

But on Thursday, against a backdrop of McLane High School in Fresno, Newsom announced a $4.7 billion “master plan” to identify and treat mental health issues early among youth 25 and under in the state, according to Fresno’s KFSN.

Newsom’s full 13-minute speech can be seen above, and contains some classic Gavin-speak. “Here is, long-windedly, what we’re proposing today,” Newsom said. “$4.7 billion to focus on universal screening and support and services for all of our children in the state of Californoa from the age of 0-25.”

“The last two years, there’s been a stacking of stress the likes of which none us could have conceived of, and none us hope for in the future,” he added. “The world that we’re living in today didn’t happen overnight. It’s over the course of decades and decades of neglect that we ended up here.”

Bravo Gavin Newsom 👏🏻👏🏻👏🏻👏🏻👏🏻for more mental health counselors at schools. Suicide is the leading cause of death in teenagers and we must try to help them before they get to that point. https://t.co/8kIPtn90Np

Newsom said his plan would add 40,000 behavioral health professionals to California schools and youth facilities, and double the number of school counselors by offering $20,000 scholarships.

In California, about a third of 7th and 9th graders and half of 11th graders experienced "chronic sadness" last school year. Suicide rates for California youth ages 10-18 increased by 20% from 2019 to 2020.

As noted above, the state saw a 20% increase in youth suicide during the pandemic. Newsom proposes to address this by focusing, in his words, “Less on crisis care and more on interventions early,” and hoping to “Treat brain health early so you don’t punish it later, humanizing and not criminalizing this issue.”

Some segments of social media response have been jumping all over Newsom, saying he caused those suicides with lengthy school closures. But it’s certainly worth pointing out that California has a very low COVID death rate, and is 39th out of 50 at statewide COVID death rates. Mississippi, Arizona, and Oklahoma had death rates nearly double California’s. And while some of those suicides could be attributed to school closures, certainly Newsom’s strategies saved thousands of lives if you look at the bigger picture.