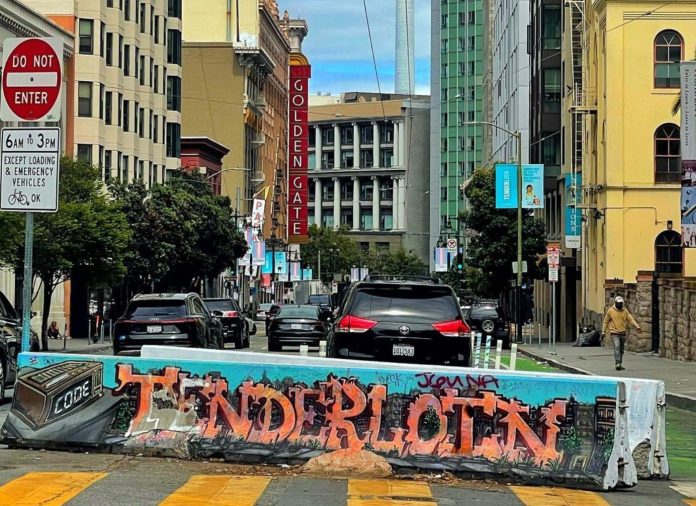 The feds continue to convict and put away drug dealers at various levels of the food chain who worked the streets of San Francisco’s Tenderloin. And while others likely quickly moved in to replace them, this is perhaps taking some fentanyl off the streets?

Three years ago, then U.S. Attorney David Anderson announced a plan for a prosecutorial sweep across the Tenderloin — and based on headlines, recent arrests, and Mayor London Breed’s emergency declaration of seven months ago, we can all judge for ourselves how much of an impact that had.

“The Tenderloin has become a magnet for retail drug trafficking to an extraordinary degree,” Anderson said in August 2019. “It is my belief that those people living, working and visiting the Tenderloin neighborhood should not be required to run a gauntlet of crime.”

The effort, involving 15 agencies, was dubbed the “Federal Initiative for the Tenderloin,” and Anderson said it would focus only dealers trafficking in large amounts of cocaine, fentanyl, heroin, and meth, and that it would last one year. In May of 2019, the Chronicle’s Phil Matier spoke to prosecutors and the SFPD and wrote about how most Tenderloin drug dealing was “controlled by two gangs.”

One of the high-level dealers/crew leaders whom DEA agents arrested as part of that effort, 27-year-old Andy Manuel Reanos-Moreno, did not end up pleading guilty to federal drug trafficking charges until November 2021. And as the Department of Justice announced Tuesday, Reanos-Moreno has now been sentenced to six years in prison.

As part of his plea, Reanos-Moreno admitted to running his crew of “redistributors” between “at least January 15, 2019, to July 31, 2019,” and he said his dealers were expected to purchase drugs for resale from him only. Prosecutors say that Reanos-Moreno “used undocumented street-level dealers and used his knowledge of immigration laws to threaten dealers who did not sell enough narcotics for the organization.”

Reanos-Moreno admitted to providing housing for his crew of dealers, and using their employment and housing as leverage to get them to sell more drugs.

The government’s sentencing memorandum for Reanos-Moreno says he “used his legal immigration status, his knowledge of real estate in the area, and his ability to pay upfront costs such as deposits on apartments as a means of both enticing street-level dealers to work for his organization and then holding their feet to the fire to ensure that they sold enough drugs or else they would lose their housing or face potential legal jeopardy.”

In addition to the six-year sentence, Judge Charles R. Breyer also ordered Reanos-Moreno to serve four years of supervised release, and to forfeit over $25,000 that was seized from his home at the time of arrest three years ago. Reanos-Moreno has been in custody since that time, so presumably with time served, he’ll be jailed an additional three years.

News about multiple Tenderloin drug figures and their sentences, some of them caught up in that 2019 sweep by federal agencies and others arrested since then, has been coming from the DoJ for a couple of months. Just last week, we learned that 33-year-old Emil Arriola Melendez of South San Francisco had been sentenced to four years in federal prison for distributing fentanyl. This was after federal prosecutors linked his sales of fentanyl in the Tenderloin to a dealer who provided fatal doses of fentanyl to three people who died in Trinity County in August of last year.

A somewhat lower-level dealer, 26-year-old Jose Alvarado, was busted by undercover federal agents earlier this year for selling over 40 grams of fentanyl and eight grams of meth in multiple transactions in the Tenderloin.

Last fall, eight individuals were charged with conspiracy by the feds, “each in connection with the activities of one of two drug trafficking organizations that are alleged to have supplied the Tenderloin district of San Francisco with copious amounts of narcotics.”