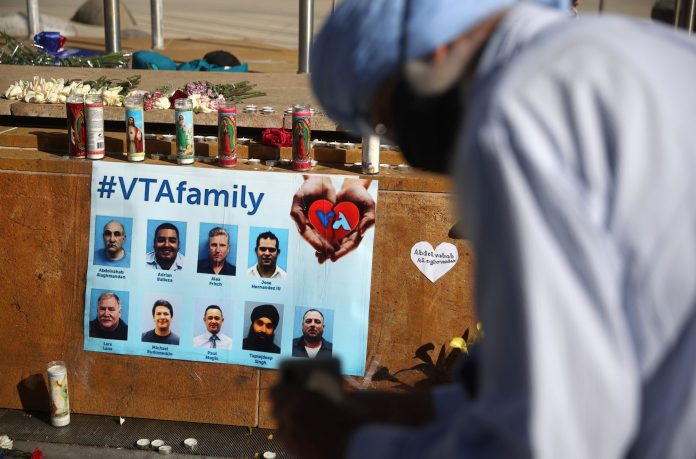 Today marks exactly one year since a disgruntled Valley Transit Authority worker opened fire and took the lives of nine colleagues in San Jose, and remembrances ranged from somber to combative to the serving of a wrongful death lawsuit.

Those victims’ families, and the mourning co-workers, did gather for the one-year anniversary Thursday morning with a 6:30 a.m. candlelight vigil, according to KTVU, along with the lighting of an eternal flame. “During the vigil, a VTA train blew its horn 10 times in honor of each of the men who died,” the station reports.

One year has passed since we lost 10 of our brothers at VTA. We keep them in our hearts and honor their memory.

“What we once enjoyed and deeply loved we can never lose, for all that we love deeply becomes part of us” – Helen Keller. pic.twitter.com/yEWemfzCKq

“It only gets harder when you continue to hear that the kind of incident that happened to us is still happening to other people around this country,” said VTA public information officer Stacey Hendler Ross, according to KTVU. “We’re trying to heal the best we can.”

Next week will mark the one-year anniversary of the mass shooting at a Santa Clara Valley Transportation Authority light rail yard that claimed 10 lives. To honor those coworkers, a group of employees constructed a special tribute — an eternal flame. https://t.co/PErWvCr0x8

That was the first observance, and San Jose City Hall will also be lit tonight in the white and blue colors of the VTA. But there was a second, unofficial memorial service later Thursday morning covered by the Bay Area News Group, where emotions got pretty raw. Several family members are pursuing legal action for their losses, as there had been previous complaints about the gunman’s temper, including that he might “go postal.”

“There were too many red flags that they didn’t pay attention to,” said Karrey Benbow, mother of 35-year-old victim Jose Hernandez, at the second, more raucous ceremony.

LIVE VIDEO: One year after nine VTA workers were killed in a mass shooting at the agency's San Jose rail yard, employees gather at the site to remember the victims. https://t.co/3tE8oFH6un pic.twitter.com/6J5Yk3xcV3

And the Chronicle reports, in what is probably coincidence, than another lawsuit from a victim’s family dropped today on the one-year anniversary. (You can read the full lawsuit here.) That suit, from the widow and children of victim Lars Kepler Lane, names the VTA, Santa Clara County Sheriff’s Office, and private security firm Universal Protection Service for inadequate security and weapons detection systems.

“The shooter was able to walk right past a Universal Protection Service guard with a duffle bag filled with at least three semiautomatic handguns and 32 high-capacity magazines with enough ammunition to kill every single person at the VTA yard that morning,” the family’s attorney Dan Schaar said in a statement.

Today as we mourn the 19 little angels and the two educators killed in Texas, we mark one year since the deadliest mass shooting in the Bay Area when nine lives were taken at the VTA railyard in San Jose. https://t.co/z2gjmUR8tc

The VTA and sheriff’s office did not respond to the Chronicle’s request for comment. A Universal Protection Service spokesperson would not comment on the lawsuit itself, but did give the Chronicle a statement that “Our hearts go out to the victims’ families.”

Related: These Are the Nine VTA Employees Killed In Wednesday’s Shooting In San Jose [SFist]

SAN JOSE, CALIFORNIA – MAY 27: A mourner pauses in front of a memorial for the nine victims of a shooting at the Santa Clara Valley Transportation Authority (VTA) light rail yard on May 27, 2021 in San Jose, California. Nine people were killed when a VTA employee opened fire at the VTA light rail yard during a shift change on Wednesday morning. (Photo by Justin Sullivan/Getty Images)