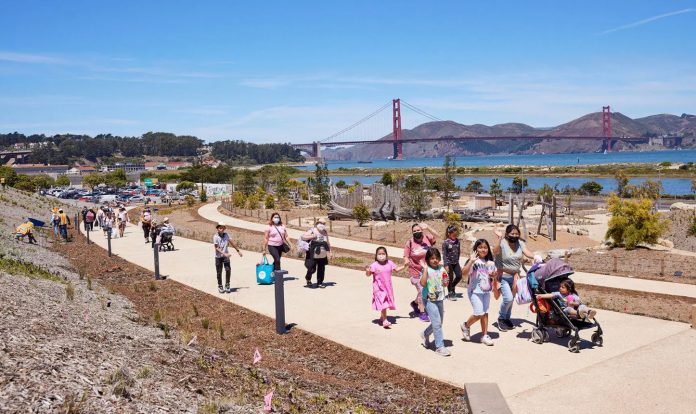 Presidio Tunnel Tops Park Opens to the Public This Weekend, At Long Last

After breaking ground nearly three years ago, the pandemic-delayed Presidio Tunnel Tops park is making its big debut on Saturday and Sunday, with special events — and hopefully pretty decent weather.

The Presidio Tunnel Tops park, which sits in part atop the now ten-year-old Presidio Parkway tunnels connecting the former Doyle Drive to the Golden Gate Bridge, is the project of the Presidio Trust, with funding from the Golden Gate National Parks Conservancy. It was designed by the landscape design firm James Corner Field Operations — best known for designing The High Line in Manhattan — and the project broke ground in late 2019 with a planned completion in 2021.

Sunday marks the official grand opening event from 10 a.m. to 6 p.m., with live music, food trucks, guided tours, and more. But as Hoodline earlier reported, the ribbon cutting ceremony is actually on Saturday — and the weather looks to be slightly sunnier and warmer on Saturday, if you want to go for a less “grand” sneak peak.

As SFist reported back in the spring, the new 14-acre park includes two new lawn areas, Golden Gate Meadow and Anza Meadow, as well as a grass-covered amphitheater area called Presidio Steps, a Campfire Circle, a Bluff Walk, new overlooks and paths, multiple reservable picnic sites with views of the Golden Gate Bridge, and a new Field Station for kids with various activities and crafts focused on science and art.

There is also a new kids’ play area called the Outpost, which the Presidio Trust describes as an “enormous outdoor playland is like nothing your family has ever experienced.” They continue, “Children will have unforgettable adventures by swinging, crawling, and climbing on huge play structures built from fallen tree trunks, boulders, and other natural things. Kids can build, make art, roam free on their own, or make up new games with friends.”

The Cliff Walk and Outpost. Photo courtesy of Presidio Trust

The opening of the complete Tunnel Tops area comes a few months after the adjacent Battery Bluffs area opened to the public. That 6-acre part of the Presidio includes parts of the park that haven’t been accessible to the public in almost a century — and includes a greenway that provides direct access between the Presidio and Crissy Field over the top of the other set of tunnels north of the Tunnel Tops park.

In total, that’s 20 new acres of parkland that has been added for the public to enjoy.

“At Presidio Tunnel Tops there are places to see amazing Golden Gate views, enjoy a picnic or buy a snack, play in outdoor nature spaces for kids, and relax in the sun,” the Presidio Trust says in an announcement. “It’s free and accessible for all. Imagine all you can do!”

Also in attendance at the Sunday grand opening will be multiple food trucks — including Curry Up Now, Poke A Go Go, Media Noche, and Satay by the Bay — and as we learned in May, the mobile food and beverage vendors will change over time, with applications reopening multiple times per year. There is also a 6,000-square-foot restaurant space in the new Building 201 in the Tunnel Tops area, and the Trust has not yet selected a restaurateur to take that space.