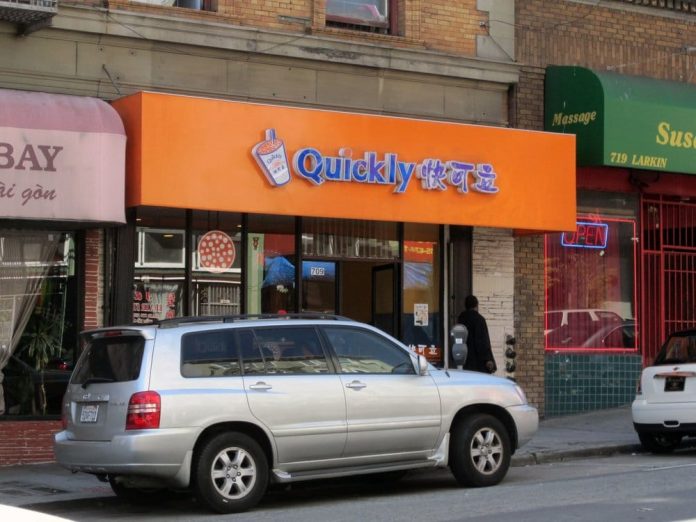 There are plenty of questions about the legal process on a suspect just charged with running a fencing operation from a Tenderloin Quickly storefront, as it turns out the suspect was already arrested and still awaiting trial for a 2019 case with the same charges of buying or receiving stolen property.

It was already a bizarre and shocking story on Tuesday when news broke that a Larkin Street location of the boba franchise Quickly was busted in a sting operation for being used as a front operation for selling gobs of stolen goods like laptops and smartphones. The husband of the shop owner, 41-year-old Quoc Le, was charged with numerous felonies and stolen property misdemeanors, though news broke the next day that Yelp reviewers had noticed this and had included anecdotal stories of it in their reviews of the shop.

Add to that a new twist to a story that seems to get odder every day. The Chronicle now reports that Le has already been arrested in 2019 for similar charges, and was out free to repeat the alleged crimes for three years as the wheels of justice in his 2019 case moved very, very slowly.

San Francisco District Attorney Chesa Boudin’s announcement of the bust, in retrospect, contained a small clue on this. It described Le as “a known fence,” that is, a person known to be moving hot merchandise. That announcement noted an “estimated 1,000 electronic items [were] recovered” in the arrest, plus $13,000 cash.

Boudin’s critics (and former employees he fired) are seizing on the previous arrest, claiming this is proof of Boudin’s lax prosecutorial standards. But looking at the timeline, Le was out free and possibly moving merchandise again under the two previous DA regimes of George Gascón and Suzy Loftus. And unsurprisingly, figures from both the previous and current regimes are pointing fingers that the other allegedly screwed this up.

But the Chronicle’s reporting shows that Ostly himself “agreed to hold off on a preliminary hearing in an effort to work out a resolution to the case” in 2019. Obviously no one could have known that the COVID-19 pandemic was coming, and that the delay would buy Le years of additional freedom. But Le did make bail, as is his legal right, and this “effort to work out a resolution” sure sounds like an opportunity for Le’s attorney to plead to lesser charges.

The pandemic delayed any trials for suspects who were not in custody, and the court de-prioritized all property-crime cases, hence Le’s trial on 2019 charges being much-delayed.

Boudin’s office argues that Le’s 2019 bail terms did not require him to wear an ankle monitor, so they couldn’t track his movements. Moreover, they say their “Operation Bulldog,” wherein investigators from the DA’s office lured Le using bait laptops, was indeed the work of his own office.

This may just be the matter of a typically slow-moving trial delayed even further by COVID-19, plus a suspect who has the means to make bail and the desire to dive right back into committing the same crimes. It’s not as if SFPD had arrested Le for anything that would have brought him back into Boudin’s custody. And boy is Boudin’s office making a point of reminding us this sting was pulled off by his own office’s Special Investigations team and investigators.

Le is once again out on bail, even with the whole new batch of charges. Not much Boudin can do about that, it was a judge’s call. But Le is at least on supervised release, his attorney tells the Chronicle, and he had been ordered to wear a GPS ankle monitor.