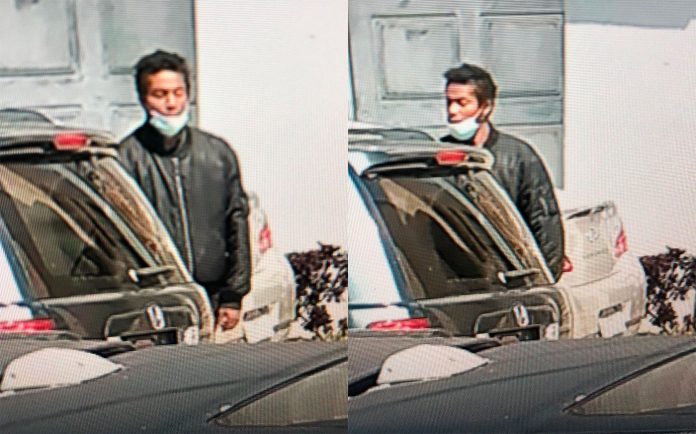 San Francisco police have released photos of a man who they say attacked and strangled a woman randomly on the street last Saturday, and they’re seeking the public’s help to identify him.

The victim says she was walking alone on Sunnydale Avenue near Bayshore Boulevard on the afternoon of May 7. She says she saw a man acting erratically and “yelling incoherent statements” up ahead, and she crossed the street in order to avoid him. The suspect then allegedly began to follow her, and the victim says she turned around, trying to escape the man.

At approximately 3:13 p.m. Saturday at the intersection of Desmond Street and Sunnydale Avenue, as the SFPD explains, the suspect allegedly grabbed the victim, “then put his hand on the victim’s neck and squeezed her throat, which prevented her from breathing.”

According to victim, “The suspect continued to assault the victim by pushing her to the ground and yelling incoherent statements.” He proceeded to strangle her and constrict her airway to the point that she says she lost consciousness.

The suspect is described as a male, between the ages of 25 and 29, approximately 5 feet 11 inches tall, 150 lbs., black hair, and last seen wearing a black jacket and black pants. ➡️ https://t.co/kgI2fvxIXb pic.twitter.com/7NwhgoEnLI

The victim tells police that she heard someone shout out to the suspect from nearby, and the suspect let go of her and fled the scene.

The suspect fled toward Sunnydale Avenue and Bayshore Boulevard, where a witness lost sight of him.

The suspect is described as a male, between the ages of 25 and 29 years old, approximately 5 feet 11 inches tall, 150 lbs., black hair, and last seen wearing a black jacket and black pants. And clearly he may be mentally unwell.

Anyone with information about Saturday’s assault or the suspect in the photos is asked to contact the SFPD at 415-575-4444 or text a tip to TIP411 and start the message with SFPD.