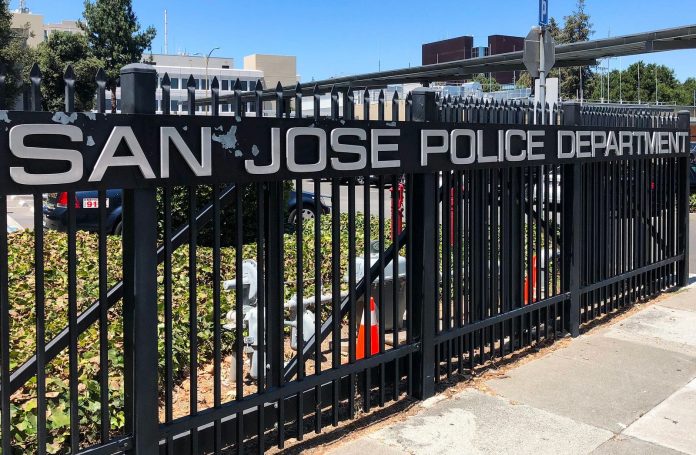 A police department already reeling from scandals involving a meth pipe and drinking on the job has an even more unsavory situation, as an officer is accused of indecent exposure toward a young woman and her mother while responding to a call.

Thursday’s Day Around the Bay news roundup on SFist made mention of a KTVU report that a San Jose police officer had traded a meth pipe for information on a case, and had consequently been placed on leave. That report mentioned some other San Jose Police Department scandals of the last two months that go well beyond the pale of normal cop misjudgment — noting both that “an officer was on leave for drinking alcohol on the job last month during the search for a 3-month-old baby who had been kidnaped,” and that in April, another officer “died of substance abuse related to fentanyl toxicity.”

32-year-old police officer Matthew Dominguez was very publicly walked out of SJPD headquarters Thursday over these charges, and the department subsequently posted the video above to Youtube. (Dominguez is on paid leave, according to the Bay Area News Group.) San Jose Police Chief Anthony Mata told the news group in a statement, “Last week I said that when an Officer violated the public’s trust or engages in criminal conduct I would personally walk that Officer out the door. Today I did it.”

KTVU has some additional details that “Dominguez and two colleagues were dispatched to a home in San Jose on April 21 at 6:30 p.m. The family had a restraining order against their son, who suffered from mental illness and police were called to investigate a possible violation of that order.”

That’s when things get weird, and there is a disturbing amount off ick factor involved, so we’ll let sections of the the Santa Clara County District Attorney’s Office “Statement of Facts” take it from here:

San Jose Mayor Sam Liccardo told the Bay Area News Group that he was “furious” over the mounting scandals. “We’ve got to fix it,” Liccardo said. “I expect and I know the department is looking into this right now and in the next several days, we’ll be able to identify the specific actionable steps the department will take to ensure that we don’t see news like this again.”

Liccardo has called for random drug and alcohol testing in the Police Officers Association’s next contract with the city. The current contract expires this coming June 30.

Per the Chronicle, Dominguez “could be put on a sexual offender list for 10 years and serve a year in jail,” if he is convicted. His arraignment is scheduled for June 22.

In terms of scandals piling up, this is all starting to sound the Oakland Police Department circa 2016!

Like many departments, the San Jose Police Department is currently complaining of staffing shortages. But when so many officers are out on scandal-related administrative leave, that argument only goes so far.