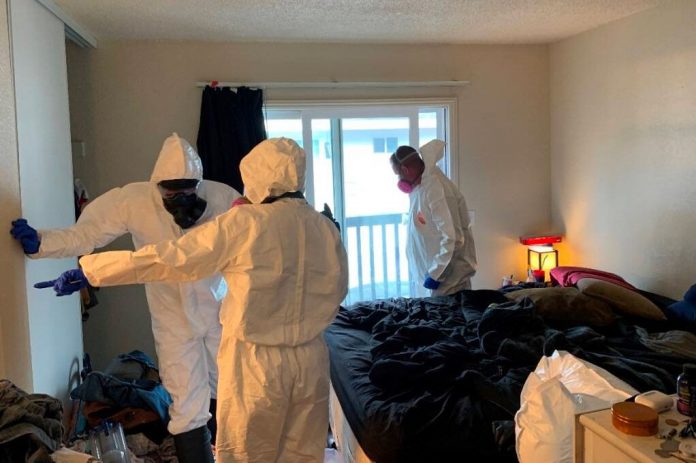 The parents of a 15-month-old toddler in Santa Rosa who was found unresponsive on Monday next to some suspected fentanyl and drug paraphernalia have been arrested on suspicion of cruelty to a child likely to produce great bodily injury or death. This is the second case of a small child dying from a likely fentanyl overdose in Santa Rosa in three years.

As KTVU reports, police responded to a home on the 800 block of Sonoma Avenue at 10:39 a.m. Monday, after a report of an unresponsive toddler. Officers found the unconscious 15-month-old girl and attempted life-saving measures, but she was later pronounced dead at the hospital.

According to Santa Rosa police, “Officers who arrived first on the scene noticed suspected fentanyl near where the toddler was found.”

A subsequent search warrant uncovered drugs, both packaged and unpackaged, “located in numerous parts of the primary bedroom, including in the bed the toddler shared with her parents.”

An autopsy and toxicology report are still pending on the dead child, but police suspect an accidental fentanyl overdose.

And this case is depressingly similar to one in 2019, in which federal prosecutors recently sentenced the people responsible for selling the drugs in question. In that case, 29-year-old Patrick O’Neill and his 13-month-old son Liam were found dead of accidental fentanyl overdoses inside a Santa Rosa home in the fall of 2019. O’Neill had been caring for the toddler while his mother was elsewhere.

A federal court ultimately convicted 19-year-old Leanna Zamora of Santa Rosa for supplying the drugs to O’Neill, and she was sentenced to over six years in prison. Two others involved in distributing the drugs were convicted as well and received lesser sentences.

Fentanyl, an opioid used in minute quantities in hospital settings, is 100 times more potent than morphine, and the potency of street-purchased fentanyl varies widely. Likely accidental fentanyl contamination of other drugs, like cocaine, has also been named as a cause of death in several recent SF cases, including the deaths of a trio of friends in a Mission District apartment earlier this year.

Facebook
Twitter
Pinterest
WhatsApp
Previous articleIt Was Ugly, But the Warriors Pulled Out a Game 4 Win Over Memphis to Take a 3-1 Series Lead
Next articleOtherwise Despicable LA Dodgers Will Join Giants in Wearing Pride Logos for ‘Pride Night’ Game In SF