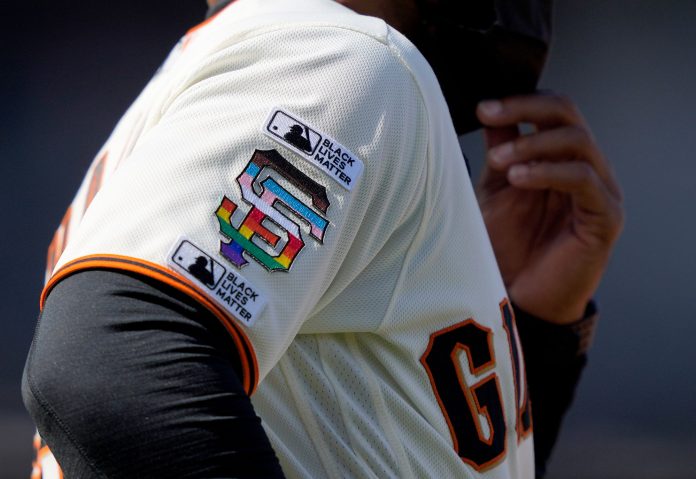 It’s believed that it will be the first major American sports game with both teams wearing LGBTQ+ Pride logos, when both the Dodgers and the Giants will sport Pride-ified logos on their hats and uniforms for their June 11 Pride Night game.

Your San Francisco Giants were trailblazing LGBTQ allies back in 1994 when they were the first major U.S. sports team to hold Until There’s A Cure Day. And back during that Candlestick Park era, even the innocuous red ribbon to promote HIV/AIDS awareness was kind of a controversial third rail. Former Giants PR director Bob Rose writes the Giants “knew that many of their season ticket holders might feel uncomfortable if Until There’s A Cure Day was perceived as merely a ‘Gay Day.’

Yet “Gay Day” would indeed become a thing, initially for a very wrong reason. In the year 2000, security guards for our rival Los Angeles Dodgers kicked two women out of Dodger Stadium for kissing. The backlash forced the embarrassed franchise make amends with a “Gay and Lesbian Night at Dodger Stadium” a month later (though it was sponsored and hosted by GLAAD, not the Dodgers). The Chicago Cubs were the first team to make put their name and logo on it with “Out at Wrigley” in 2001. The Giants held their first “LGBT Night” in 2002, which still continues on as Pride Night or Pride Day, depending on whether it’s a day or night game.

The Giants became the first team to actually incorporate the Pride rainbow colors into their logo for Pride Day just last year. And the two NL West rivals are making LGBTQ+ sports history again this year, as the Bay Area News Group reports both the Giants and the Dodgers will both be wearing Progress Pride Flag-colored logos for their Pride Day matchup on June 11.

For the first time ever, the Dodgers will be wearing custom on-field pride caps at Dodger Stadium on June 3 for LGBTQ+ Night. Then on June 11, the Dodgers and Giants will make history when they both take the field at Oracle Park wearing their respective team’s pride caps. pic.twitter.com/BUv06iqJGh

Oh shit, did I just embed a Dodgers ball cap? I did, and as a palate cleanser, here’s Honey Mahogany singing the National Anthem at the 2021 Pride Day game.

Now this is an All-Star! @honeymahogany crushed the National Anthem today at the @SFGiants game. So proud!!! 🇺🇸🏳️‍🌈🏳️‍⚧️ #TransIsBeautiful #PRIDE pic.twitter.com/Cq7prqfpCn

You’ll notice the logo is the Progress Pride rainbow that also incorporates Black, Brown, and Trans Pride colors. The Dodgers otherwise have their own Pride Day home game on June 3 against the New York Mets, and will wear the colors that day too.

As a bonus, the news group adds that anyone with tickets that night  “will also get socks with the 11 colors of the Progress Pride flag and a Giants logo.”

The lone hold out is the Rangers. They've shown no indication they plan to have one, and declined an interview for this story.

You can cynically sneer that this is just a ploy to sell tickets and additional hats and merchandise, and you would to some degree be correct. But it’s also a quiet milestone  that pretty much every team in baseball now does a Pride event during June. The only remaining holdout is the Texas Rangers, and as the Dallas Morning News reported last year, “The Rangers are the only team that doesn’t have a pride game promotion of any kind. There’s no indication that they’re planning to have one in the near future, either.”

Image: SAN FRANCISCO, CALIFORNIA – JUNE 05: First Base Coach Antoan Richardson #00 of the San Francisco Giants looks on while wearing a jersey with patches saying “Black Lives Matter” and the Giants logo dressed with rainbow colors that symbolize the LGBTQ community on San Francisco Pride Day against the Chicago Cubs in the bottom of the first inning at Oracle Park on June 05, 2021 in San Francisco, California. (Photo by Thearon W. Henderson/Getty Images)