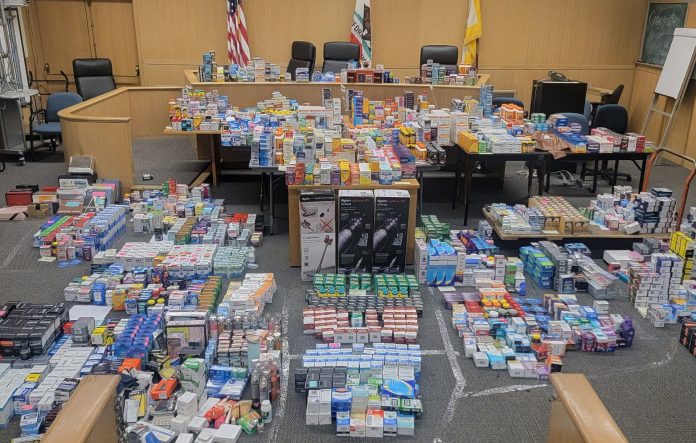 What looks to be a brazen stolen goods fencing operation, with items that sure appear straight lifted from shelves of Walgreens and CVS, was allegedly netting one Ingleside man $500,000 a year as he just resold the stolen loot online.

The San Francisco discourse on stuff stolen from Walgreens and CVS retailers correctly assumes that the items are being resold, but we may be wrong to assume that they’re being resold on street corners like 24th and Mission. The real money may be in reselling the stuff over online platforms like Amazon, eBay, and Facebook Marketplace, where sellers can enjoy total anonymity, and the customer base is happy to pay a much higher price than a Mission Street haggler would.

The four-month investigation leads to the seizure of nearly $200,000 worth of stolen goods. Sergio Manuel Puga-Tenorio of San Francisco, identified as the primary suspect in the fencing operation.➡️ https://t.co/0KhWX2Jolx pic.twitter.com/kVEPQHok36

That appears to be the case, as the SFPD sees it at least, with the latest arrest that yielded an estimated $200,000 worth of stolen items from an Ingleside District home on Milton Street. Police arrested 38-year-old Sergio Manuel Puga-Tenorio, and suspect he’s been running an “organized retail theft fencing operation” with loads of these stolen items for years.

Taking a look at the items SFPD recovered; brand new cordless vacuum cleaners, and cartons’ worth of Mucinex, Metamucil, and probiotic colon health capsules (!) — these latter items seem very obviously ripped off from Walgreens and CVS-type stores, or big-box stores like Target. The police department press release describes the items as “stolen over-the-counter medication and personal care products.” Moreover, “The sale of the locally stolen items was done on an online platform and shipped to individuals throughout the country.”

Though oddly, despite this enormous haul that makes all the stolen goods at 24th and Mission look like peanuts, SFPD says Puga-Tenorio was only charged so far with “one count of possession of stolen property.”

This is still a useful peek into the world of reselling stolen retail goods, and how online marketplaces may be a much bigger problem than nickel-and-dime street vendors. The SF Board of Supervisors approved a resolution in December urging Congress to pass the INFORM Act, which would require online marketplaces to “to collect, verify, and disclose certain information from high-volume, third-party sellers.” But that legislation has been stuck in the U.S. Senate for more than a year.

Facebook
Twitter
Pinterest
WhatsApp
Previous articleCurrent COVID Surge Likely As Large or Larger Than Winter Omicron Surge
Next articleWe Are On La Niña Watch For Third Year In a Row, Which Could Be Bad for Drought