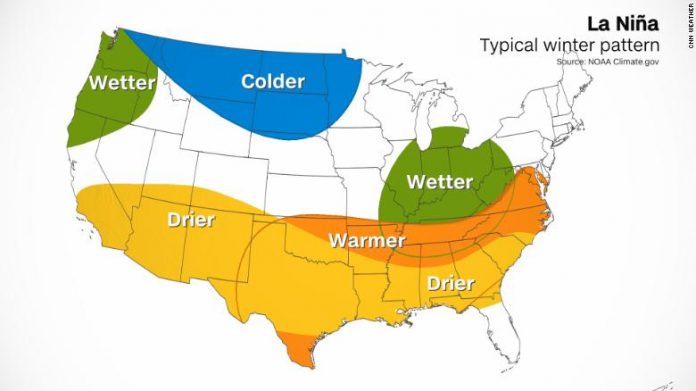 We Are On La Niña Watch For Third Year In a Row, Which Could Be Bad for Drought

The last two drought-y winters in California have been La Niña winters, and if a third one is taking shape, that is almost certainly bad news for the state’s drought recovery.

Climate forecasters at the National Weather Service put out their forecast Thursday for the remainder of 2022, and right now they are putting the chances of a continued La Niña cycle through fall and early winter at between 60% and 66%. By September, the picture will be clearer, and we’ll know whether we are in for a third consecutive La Niña winter — and potentially another long year of continuing drought conditions.

On the optimistic side, as far as Northern California is concerned, the past two winters have been mixed bags when it comes to rain, but this year brought especially dry months in February and March after a wet December and very wet late October. That all resulted in 2021-22 rainfall season totals that were below normal pretty much across the board, but only hugely below normal in a couple of spots like the North Coast and Central Coast. Southern California also saw, on average, total rainfall that was 59% of normal for the rain year — and that is in keeping with historical La Niña patterns.

La Niña conditions are defined by below-average subsurface temperatures in the Pacific Ocean, as well as wind abnormalities — and the latter being bad news for hurricane season on the East Coast. (La Niña cycles tend to inhibit wind shear across to the Atlantic, and the only the thing that brings hurricane season to an end is wind shear.)

As SFist has discussed previously, the impacts of La Niña cycles are not as easy to predict for our region because we are between two geographies of predictable abnormality — higher than average rainfall in the Pacific Northwest, and lower than average rainfall in SoCal and the Southwest. But the last two years have produced relatively dry winters for us, and have sunk us deeper into drought — and many experts have said that the only thing that will take California out of this drought are a couple of really major El Niño cycles, and those can be unpleasant in their own way, with flooding and no sunlight for many days.

The current forecast only takes us through December, and it’s not like atmospheric rivers can’t pummel us with rain even in a La Niña year, like that “bomb cyclone” that hit us the third week of October 2021. The big question will be whether the snowpack returns and holds through the winter season in the Sierra. This year the snowpack was 160% of average at New Year’s, thanks to all that December snow, but because of the super dry February and a warm March, it left the Sierra snowpack at 38% of normal by April, and subsequently 22% of normal in early May.

In short, we can’t know what next winter holds, rain- and snow-wise. But brace yourselves for more drought, and be pleasantly surprised if something else happens.